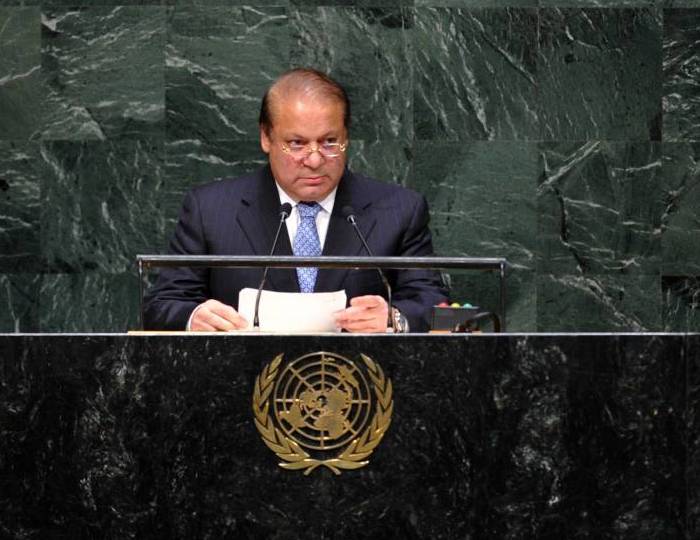 Pakistan Prime Minister Nawaz Sharif has proposed a four-point peace initiative that embraces mutually renouncing the use or threat of use of force, demilitarising Kashmir, withdrawing from the Siachen Glacier and formalising ceasefire along the Line of Control.

“Peace can be achieved through dialogue, not disengagement,” Sharif said in his address to the General Assembly on Wednesday. “Cooperation, not confrontation, should define our relationship.”

In a speech with several references to Kashmir, he made peace initiative proposal as a bilateral move — except for a request to increase the UN Military Observers Group in India and Pakistan (UNMOGIP) — in an attempt to meet India’s condition that the dispute was a bilateral one and there should be no outside involvement.

Although he tried to strike a conciliatory note with his proposal and its phrasing, Sharif insisted elsewhere in his speech on “consultations with Kashmiris, who are an integral part of the dispute, are essential to evolving a peaceful solution”.

New Delhi considers Kashmir an integral part of India and any such move an interference in internal affairs and counterproductive to a dialogue.

Recent attempts at holding bilateral talks have been sabotaged by Pakistan bringing in the Kashmir question or engaging Kashmiri separatists.

Sharif referred to the recent ceasefire violations along the Line of Control and asserted: “Wisdom dictates that our immediate neighbour refrains from fomenting instability in Pakistan.”

He said that “the two countries should address and resolve the causes of tension and take all possible measures to avert further escalation” and for this, he was making the peace initiative proposal.

These were the four points in his proposal:

– Pakistan and India reaffirm that they will not resort to the use or the threat of use of force under any circumstances.

“An easing of threat perceptions through such peace efforts will make it possible for Pakistan and India to agree on a broad range of measures to address the peril posed by offensive and advanced weapons systems,” Sharif said.