Referring to the ongoing strife in Yemen, which border the Saudi Kingdom, the chief Saudi cleric termed Houthis as a “misguided elements,” and urged Muslim youths not to “play in the hands of those rebels fighting against Saudi-led forces. The Mufti also called upon the youth to shun groups like Daesh (Islamic State).The chief mufti urged Muslims to staunchly practice Islam which is a gift of God for the entire humanity.

“Islam is a gift of Allah for us; this religion is a religion of definite teachings and peace. The Prophet (PBUH) has directed us to be God-fearing and thankful to Him who bestowed us with faith. Therefore, the Muslims must staunchly follow those teachings,” he said.

Concluding his annual sermon, Mufti Abdullah prayed for the unity and love.

At Arafat, some two million pilgrims packed should-to-shoulder for an emotional day of repentance and supplication. Many wept as they raised their hands toward the sky, asking for forgiveness and praying for loved ones.

Throughout the day, hundreds of thousands of pilgrims scaled the hill and prayed facing the Kaaba, the cube-shaped structure in Mekah that observant Muslims around the world face in prayer five times a day.

Many of the faithful from around the globe camped at the foot of Mount Arafat where they slept, exhausted from their journey, and prayed despite the scorching sun.

Carrying colorful umbrellas, they walked from dawn in massive crowds towards the 300-metre-high slippery, rocky hill — also known as Mount Mercy — located on the plain. Here they believe Mohammed gave his last sermon 14 centuries ago after leading his followers on hajj.

Hajj pilgrims from around the world are now preparing to move to Muzdalifah after they gathered at Mount Arafat in Saudi Arabia on Wednesday where they stood in prayer until sunset in one of the most important days of the Islamic calendar. The rocky areas of Arafat, Mina and Muzdalifah a few kilometers east of Makka are the main sites of hajj, which culminates with Thursday’s Eid al-Adha holiday, and are the location of rituals laid out by the Prophet Mohammed. Pilgrims started preparing to move to Muzdalifah after sunset. There they will gather pebbles for a symbolic stoning of the devil ritual on Thursday, which is also the Eid al-Adha feast of sacrifice marked by the world’s more than 1.5 billion Muslims. 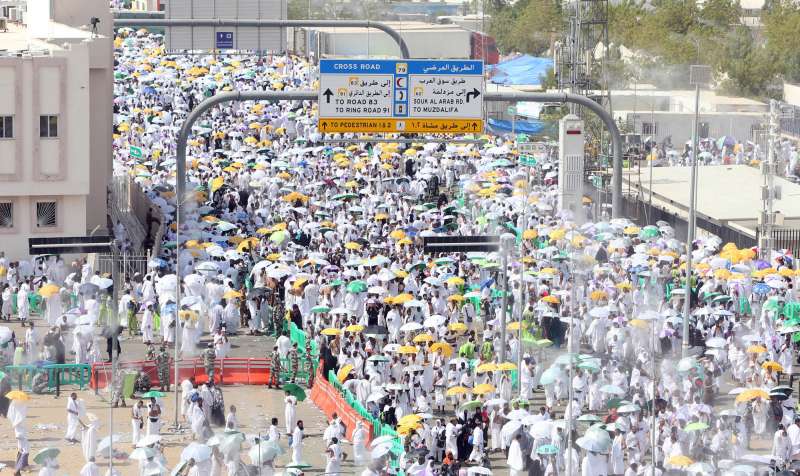 To organise the flow of pilgrims, security forces formed human chains along the roads, while volunteers handed out boxes of food and cold water bottles.

The faithful gathered in their hundreds of thousands for noon prayers; as water sprays were turned on to cool them down while helicopters hovered overhead.
For many pilgrims, hajj is the spiritual highlight of their lives.

Many reached Arafat by bus while some walked from the holy city of Mecca about 15 kilometers (nine miles) away. Other pilgrims arrived from nearby Mina using the elevated Mashair Railway linking the holy sites of Arafat, Muzdalifah and Mina, a tent city where many pilgrims spent Tuesday night.
After sunset on Wednesday, the faithful will moved to Muzdalifah. There they will gather pebbles for a symbolic stoning of the devil ritual on Thursday, which is also the Eid al-Adha feast of sacrifice marked by the world’s more than 1.5 billion Muslims.

This year’s gathering is about the same size as last year is, with 1.4 million foreign pilgrims joining hundreds of thousands of Saudis and residents of the Kingdom. They are undeterred by a construction crane collapse at Mecca’s Grand Mosque earlier this month that killed 109 people, including foreign pilgrims.

About 400 people were injured by the crane, which was working on an expansion of Islam’s holiest site. About 100,000 police have been deployed to secure pilgrimage sites and manage the crowds.

Pilgrims began the Hajj on Tuesday by entering Ihram, a state of purity in which they must not quarrel, wear perfume, or cut their nails or hair. During Ihram, men wear a seamless two-piece shroud-like white garment, while women must wear loose dresses, generally also white, exposing only their faces and hands. The clothing emphasizes their unity, regardless of whether they spend the hajj in Mecca’s five-star hotels or in shabby high-rise hostels.