The all night long performance will bring together critically acclaimed Indian artists in a unique festival celebrating the longest day and shortest night. South Asian Arts-UK is the only organisation in the UK to host an all night summer solstice festival celebrating Indian classical music. Running for its fourth year, international artist Rakesh Chaurasia will be attending.

Held at Left Bank in Leeds, a grade II listed church building, the concert will begin at 8.30pm with musicians playing through the night until 6am, in the UK’s only Indian solstice event. International flute player and composer, Rakesh Chaurasia, will be making a special guest appearance in Leeds.

Rakesh Chaurasia has achieved numerous awards and accolades from around the world,including the Indian Music Academy Award in 2007.  He has regularly played at prominent festivals with invitations to perform solo at major events, including the Festival of Saint-Denis in Paris and concluded the BBC’s live 24 hour recording to mark HRH The Queen’s Silver Jubilee.

Keranjeet Kaur Virdee, Chief Executive of the arts charity, SAA-uk,  explains, “We truly believe that the event is a magical and captivating night. We know that our concert is a firm favourite amongst those who practice and appreciate the art form, but we also want to welcome those who are unfamiliar with Indian music to come along and experience the magical sounds on offer. We are confident that the audience will have a mind blowing experience.”

Showcasing the best Indian talent from around the world, the evening’s entertainment will begin with one of the UK’s finest young violinists of Carnatic music Dr. Achuthan Sripathmanathan and his fellow musicians. Returning to Leeds for the second time will be Deepa Nair, who will captivate the audience with her soul searching voice before Pandit Sanju Sahai takes on themidnight hour with his incredible finesse and dexterity through the language of Tabla. 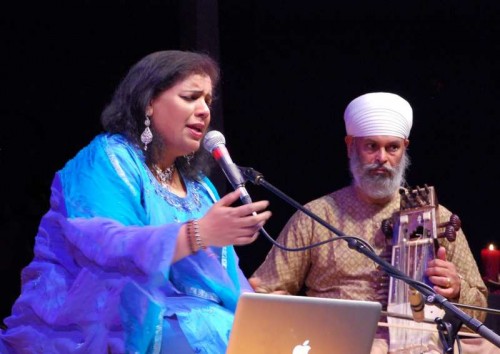 Mehboob Nadeem will play sitar in the very early hours of the morning, followed by the call for dawn by the amazing flute of Rakesh Chaurasia and formidable tabla of Bhupinder Singh Chaggar.

Free Indian Chai and coffee will be available all night and audience attendees will be able to feast on home made snacks and a meal for only £3.50 with all profits going back into SAA-uk’s young performers fund.