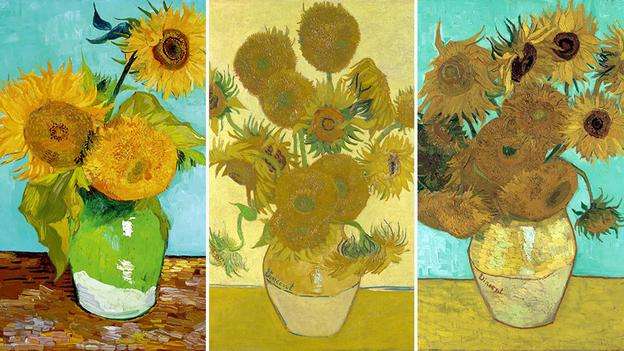 The colours of Vincent van Gogh’s famous “Sunflowers” painting at the Van Gogh Museum in Amsterdam are changing over time because not all of the mixture of pigments used by the Dutch master are photochemically stable, a new study suggests.

A group of scientists headed by Letizia Monico from the Institute of Molecular Science and Technology (CNR-ISTM) of Perugia, the University of Perugia and the University of Antwerp, carried out a detailed spectroscopic investigation of the painting’s tiny paint particles to identify areas that are susceptible to change.

“There are different shades of the pigment, and not all of them are photochemically stable over time,” Monico said.

“Lighter chrome yellow has sulphur mixed into it, and is susceptible to chemical degradation when exposed to light, which leads to darkening of the pigment,” he added.

Vincent van Gogh (1853-1890) is famous for his use of bright yellow colours. He also used so-called chrome yellows, a class of compounds consisting of lead, chromium and oxygen.

The scientists took two small paint samples, measuring less than one millimetre each, from the 1889 painting on display in Amsterdam and examined it using DESY’s X-ray source PETRA III.

“At least at two sites from which the paint samples were taken, a colour change has occurred in the Sunflowers as a result of the reduction of chrome yellow,” Monico said.

This suggests that the Sunflowers may originally have looked different from what we see today.

The results were published in the journal Angewandte Chemie International Edition.