Universally Acclaimed Film “The Crow’s Egg” which provides a vivid portrait of urban child poverty in South India is all set to hit the UK screen.  Asian Lite reports 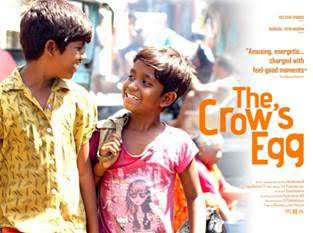 The critically acclaimed, feel-good family drama, The Crow’s Egg (Kakka Muttai), which has been storming the international film festival circuit is set for its UK release on 20th November through Fox Star Studios.

Set in the blistering squalor of a Chennai slum, the Indian National Award Winning film, The Crow’s Egg blends harsh realism with fantasy as it tells the uplifting story of two young, impoverished brothers (Kakka Muttai and Chinna Kakka Muttai) who embark on an endeavour to raise enough money in order to be able to enter their local ‘up-market’ pizza parlour with the desire to taste this new-fangled dish called ‘pizza’.

Realizing that one pizza costs more than their family’s monthly income, they begin to plot ways to earn more money – inadvertently beginning an adventure that will involve the entire city. The interesting title is a reference to the poor state of the street urchins, often going without food for days and surviving only by stealing crow’s eggs to eat.

The film brings together an ensemble cast including two leads who are played expertly by young, award-winning actors V Ramesh and J Vignesh who jointly picked up the Best Actor award at the Indian Film Festival of Los Angeles – IFFLA, when the film received the Audience Choice Award for Best Narrative Feature. Completing the line-up is Aishwarya Rajesh, Nivas Adithan and making a guest appearance is renowned Tamil actor, director and playback Singer, Simbu. The film is written and directed by M Manikandan and is produced by leading Indian film actor Dhanush. The rousing musical score has been penned by GV Prakash Kumar.

Receiving universal acclaim at its world premiere at the Toronto International Film Festival in 2015, the film has been praised by audiences and critics alike for its unique story and impressive performances.  It went on to win two National Film Awards in India for Best Children’s Film and Best Child Artist for its lead stars V Ramesh and J Vignesh.

The Crow’s Egg is about two brothers who live in a concrete-and-tin Chennai slum home in India. They are so poor that their staple diet consists of eating raw crow eggs, which they steal from crow nests. This is how they earn the nicknames – ‘Elder Crow Egg’ and ‘Younger Crow Egg’. One fine day their favorite superstar inaugurates a Pizza parlour near their slum.

Soon the boys begin dreaming of eating this Pizza. They seek help from many well-wishers and gradually earn the money they need. Unfortunately, the security guard at the Pizza parlour shoos them away seeing their shabby appearance and, when they refuse to leave, the manager slaps them in public.

This incident is captured on a cell phone by a boy who lives in the slum. The video footage of this incident attracts the attention of two goons who bring it to the notice of the pizza franchise owner, news channels and local politicians. Fearing his license will get canceled, the owner begins desperately looking for the two boys, who have disappeared.

The Crow’s Egg is a cleverly observed, articulate and excellently narrated Tamil film. The film applies a combination of realism and satire as a magnifying glass to explore the deeper moral issues of extreme poverty, exploitation and the strong power of family values that ultimately interweave into every aspect of the protagonists’ lives.