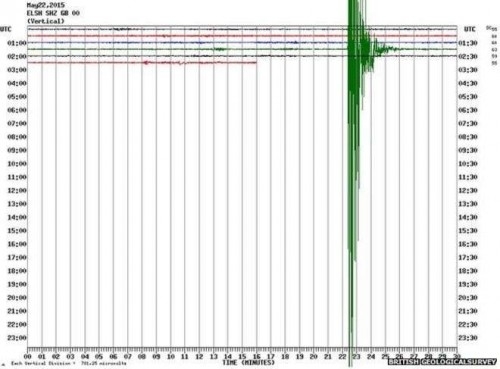 A 4.2 magnitude earthquake has been recorded in Kent, the British Geological Survey (BGS) has said.

The tremor originated near Sandwich at a depth of 15km (9.5 miles) underground at 02:52 BST, it reported.

Residents in other areas including Margate, Canterbury and Southend-on-Sea, Essex, reported feeling the earthquake.

Kent Police said a number of calls had been received but no injuries or structural damage had been reported reports BBC.

The European-Mediterranean Seismological Centre (EMSC), which monitors seismic activity across the continent, also recorded the earthquake.

Theresa Foord, from Eastry near Sandwhich, said: “I heard this massive crash and then the whole house started to shake.

“Plates came off the wall, doors came open – it was all very frightening.

“It seemed to go on for ages but it was about three to five seconds.”

BBC South East reporter Simon Jones, who lives in Canterbury, said he was woken up when his house started shaking.

“The initial thought was perhaps something had gone into the house, like a lorry but then I turned to social media and people right across east Kent were reporting an earthquake,” he said.