The Hindu Lawyers Association (HLA) hosted its first Yoga in the City event in the heart of London’s legal district joining hands with the Art of Living …reports Asian Lite news.

The HLA recognised that the lawyers and city professionals lead fast-paced careers with little opportunity and time to focus on their own well-being.  Inspired by the promotion of yoga by the UN resolution to establish an International Day of Yoga, The HLA organised a yoga event at Lincoln’s Inn Field and BPP Law School, Holborn.

Yoga, including breathing techniques and guided meditation was conducted by Ameet Aggarwal, (Chairman, Art of Living-London) and Jaymini Chouhan from the Art of Living Foundation-UK. Participants were introduced to yogic postures in a fun and light way freeing their minds from the busy working day that was or going to be.

According to Angeli Vadera, Vice-Chair of the Hindu Lawyers Association, “Yoga in the City 2015 was the first summer well-being event organised by the HLA. As an organisation, we wanted to introduce legal professionals and other city workers to yoga techniques which would re-invigorate their minds and provide calamity from within. The event was a success, attracting a diverse audience who all thoroughly enjoyed participating in the exercises and learning new techniques.’’ 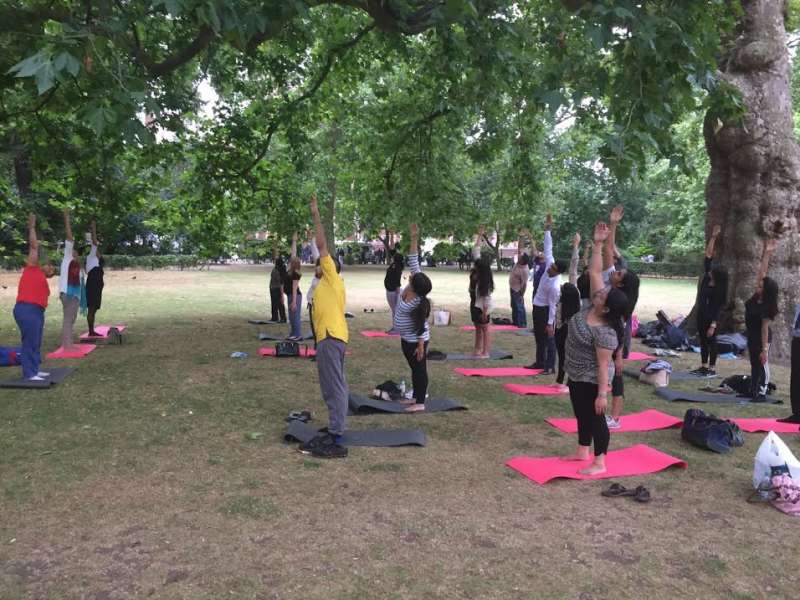 continuous engagement. Yoga, an age-old method of attaining deep rest and energizing the self at the same time, can come in handy to up your career graph. The mind, which is often stuck with the past and anxious about the future, can deprive you of living in the present and giving your best at what you are doing,” said Ameet Aggarwal, Chairman, Art of Living-London

The organisers claimed that Yoga in the City served its purpose in focusing the attention of legal and city professionals away from the ‘hustle and bustle’ of the city to an ancient tradition which serves to unite mind and body with the external environment.