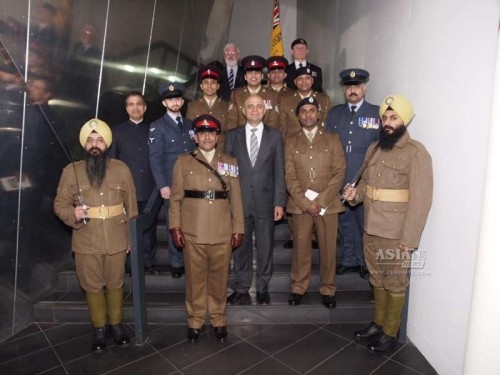 British Culture Secretary Sajid Javid led a multi-faith cultural evening at IWM North, part of Imperial War Museums, to mark the centenary of the second Battle of Neuve Chapelle – the first major engagement of Indian troops on the Western Front.

The event, organised by Department for Culture, Media and Sport (DCMS) as part of the Government’s four-year programme to commemorate the Centenary of the First World War, included traditional Indian dance, presentations from young people in the North West on what they have learnt about the Indian troops involvement, poignant readings and poems, and the reciting of a statement honouring the contribution of Indian troops and committing British Hindus, Muslims and Sikhs to work together for the good of the country.

The audience of 300 people were made up of military personnel, civic dignitaries, religious leaders from the Muslim, Hindu and Sikh faiths, representatives from the Undivided Indian Ex-Servicemen’s Association, the Royal British Legion, schoolchildren from the North West region and representatives from projects around the country looking at the Indian contribution to the First World War.

In his speech the Culture Secretary Sajid Javid said:

“Events in France a century ago are still relevant in Britain today. It’s important that we continue to tell the incredible story of the Indian Army and we never forget the Battle of Neuve Chapelle.

“Neuve Chapelle is not just the place where the course of the First World War hung in the balance for four long days. It is also the place where men from across Britain’s empire stood shoulder to shoulder, fighting thousands of miles from home in defence of what was right. Men from modern-day India, Pakistan, Bangladesh and Nepal taking up arms alongside soldiers from every corner of the UK.”

“The Indian Troops played a significant part in the First World War and we welcome the Government’s efforts to ensure that the centenary is inclusive of all the faith communities who voluntarily participated in the war and pray that this national commemoration of the Battle of Neuve Chapelle will be a resounding success.”