The deployment of RAF Sentinel aircraft, the most advanced airborne surveillance system of its kind in the world, will be extended until 2016. It is the RAF’s only long-range wide area battlefield surveillance aircraft, using two types of radar it is able to identify and track multiple targets over great distances. Flying three missions a week, the aircraft will continue to provide critical information which allows British and coalition forces to hit ISIL targets on the ground.

Fallon said: “The fight against ISIL is our top operational priority and Britain is playing a vital role. Our armed forces have conducted more than 300 strikes, flown almost a third of all coalition surveillance flights and trained over 2,000 local troops.

“In 2014 ISIL enjoyed near total freedom of movement across much of Iraq but we’ve helped stop the jihadist advance, reclaiming a quarter of ISIL-held territory. Now we must build on this progress. We will not let up until we have defeated this barbaric terrorist organisation.”

On the 26th September 2014 Parliament voted to assist the Iraqi government in their fight against ISIL terrorists. The UK joined a 62 nation Global Coalition made up of international partners including nations from the Middle East, all united in a determination to degrade and ultimately defeat ISIL.

Since then the UK has provided forces and equipment that few other nations can. Currently there are around 800 personnel, including the Coalition Deputy Commander, supporting the campaign:

With the support provided by Britain, at the heart of the Coalition, Iraqi forces have regained 25 per cent of the territory that ISIL held after its advance last summer. They have taken back 200 square kilometres in the North; retaken Tikrit in the centre, with around 100,000 citizens now having returned to the city; and have pushed ISIL out of Diyala province in the East. 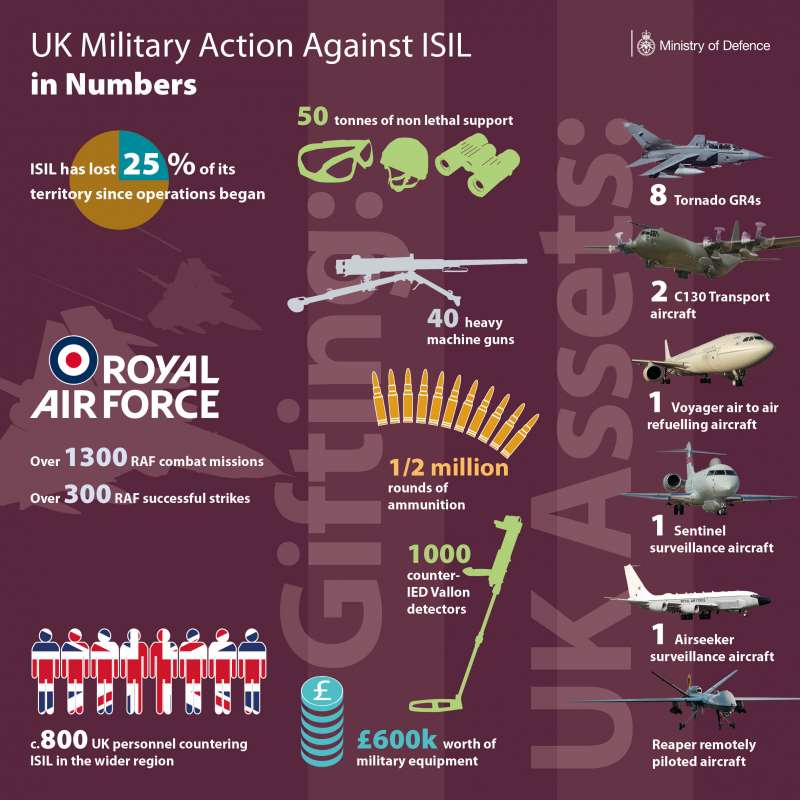