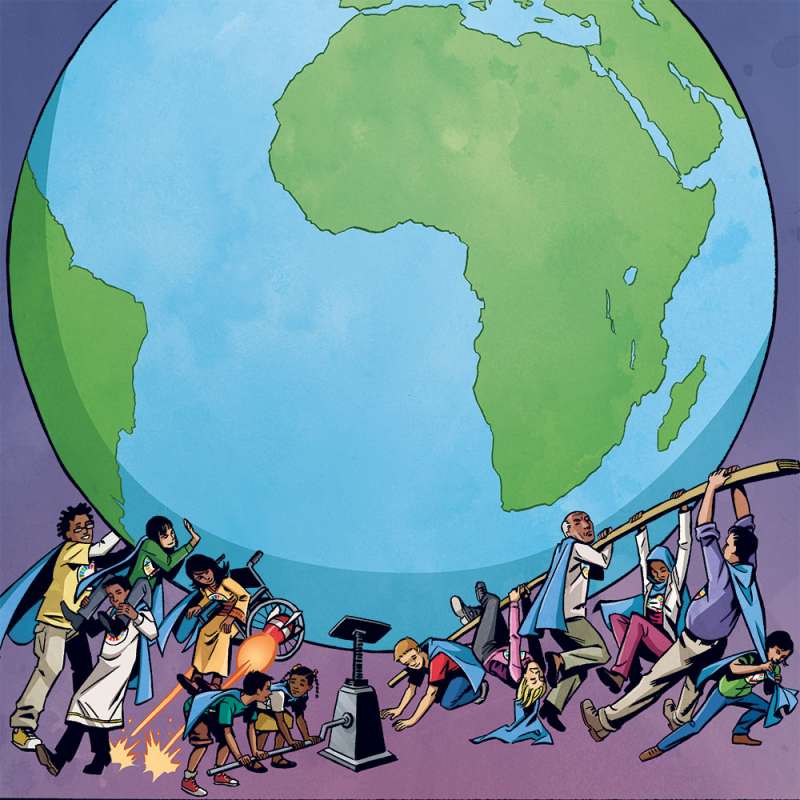 Just imagine that when you enter 71, you dare an adventure by declaring your resolve to achieve 17 new goals by the time you turn 85. You do not just proclaim this but also show an extraordinary determination by providing 169 quantifiable targets for these goals to prove that you mean business.

Further, you venture into great festivity by displaying those 17 goals by illuminating your own huge building on the banks of the Hudson River in New York. You do not stop at that. You invite all your high-level friends to demonstrate your strong will and garner their support to achieve these social and environmental goals. The global community is provoked to acclaim your resolve.

Sounds strange? Not for the United Nations, which did exactly that last week on the occasion of its 70th anniversary. The 193-member United Nations General Assembly on September 25 formally adopted 17 bold new global goals as part of a transformative, universal and integrated visionary framework on 2030-Agenda for Sustainable Development.

This comes at the time when the world is grappling with earth-shaking terrorism, life-threatening climate change, sickening corporate corruption, unprecedented inequality and global slowdown of major economies. Aimed to end the poverty and hunger amidst such atmosphere is like an old man resolving to scale a Himalayan summit even when glaciers around are melting, treacherous winds are blowing across, visibility is extremely poor and, above all, the life-line resources are dwindling.

These bold Sustainable Development Goals (SDGs) are built on its earlier eight historic Millennium Development Goals (MDGs) and its 18 targets formulated way back in 2000 and slated for the finish line in 2015. For the first time, since its inception, the UN had engaged head-on to link poverty-reduction and development imperatives as sine qua non of peace-making.

For the last three years, beginning with the Rio+20 meeting in 2012, the process of formulating the SDGs as the follow-up to MDGs spread across the continents and engaged a broad cross-section of civil society.

However, acerbity and cynicism were expressed in abundance by the elite media. Many, particularly from the developed countries, reported on the SDGs with extreme sarcasm and even decrying the whole exercise as one of the usual UN jamborees. Some even called them “Stupid Development Goals”, others “Senseless, Dreamy and Garbled Goals”.

The SDGs and their formulation process cannot be referred to the jury without looking at the report card of the MDGs and the hands-on and concrete experience that the global community gained over the last 15 years. It is largely true that awareness about MDGs never reached the poor and hungry for whom they were designed. They remained unknown to women and children for whose empowerment, mortality-reduction and health-improvement they were targeted.

However, by any standard, MDGs can be termed as mixed success across the globe. The report card in 2015 reveals that the number of people living in extreme poverty declined by more than half, from 1.9 billion in 1990 to 836 million in 2015; the number of out-of-primary school children fell by almost half, to 57 million in 2015, from 100 million in 2000 and gender parity in primary schools has been achieved in the majority of countries.

Economists and development specialists sneering at the UN attribute reaching the MDG targets mainly to the progress in emerging countries like China and India. UN watchers also criticize, rightly so, the whole process of formulating the MDGs, which, according to them, are by a few consultants of the world body. The MDGs did have their weaknesses; the SDGs have taken note of the lessons learned over 15 years and strengthened the resolve for the post-2015 agenda. The MDGs, though simple and straightforward, were not really mainstreamed in the national policy and budget documents per se, but their intents were.

The MDGs were not legally binding. They were meant only for the developing countries and relied on financial and technological assistance from developed countries. For nearly half of their duration, the developed countries buckled under their own economic and growth crisis. In this context, the positive outcomes of MDGs stand out even more distinctly.

The UN is a unique movement of multilateralism and is also a campaign for global peace and well-being of the people and the planet. The MDGs and SDGs are not just about poverty, hunger, disease, unmet schooling, gender inequality and environmental degradation as such. The SDGs represent the seminal movement that recognizes that global peace would be a mere dream without sustainable development, responsible business and social inclusion. They are, therefore an innate part of the historic, worldwide and unprecedented mobilization to address a set of important economic, environmental and social primacies.

The SDGs apply to all countries, developed and developing, and herald an era of global partnership. Their apparent unwieldy number of goals and targets are needed to cover overlooked but now critical challenges – like energy – to complete the sustainable development agenda. The trillions of dollars needed to complete the SDGs are not tied yet, but that has not deterred the world leaders in their unanimous launch.

The MDGs squandered the opportunity of mass awakening on the goals and targets, particularly among the schools and universities. They hardly percolated down to the bottom of the pyramid. It would be gross amiss if the youth of today, who will be managing the future, are not engaged early on in SDGs. The UN needs the due engagement of young operators to drive the transformation with 21st century technologies towards a peaceful world without overshooting planetary boundaries.