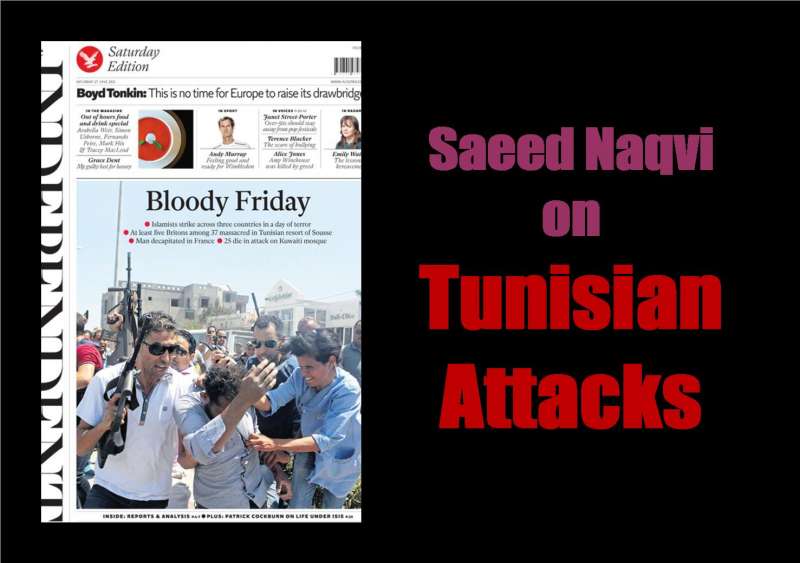 Systems of revenge and vendetta are part of cultures among the tribes of Afghanistan, clans of Somalia, Sicily, Arab lands, Latin America and part of the world not in our regular focus.

Nations have embarked on vendetta to teach opponents a lesson, exactly the term used by Deng Xiaoping to teach Vietnam a lesson in 1978. It turned out that he got something of a black eye at the battle of Langson. For having been cheeky at Pearl Harbour, the Japanese faced President Trueman’s wrath at Hiroshima and Nagasaki.

Such thoughts have crossed my mind over the past few days here, in London, watching news shows about the outrage in Tunisia. On page one of the Independent is the smiling, almost benign face of Seifeddine Rezgui, the alleged perpetrator of the horrific outrage. Prime Minister David Cameron has promised a “full spectrum” response.

Rezgui is already dead, so we do not know the ones who are encompassed by Cameron’s “full spectrum”. Recent history of Western “response” is replete with collateral damage on an unspeakable scale.

Accidental killings alone would account for hundreds of thousands of Afghan, Pakistani and Arab lives. Even the official figures of those killed in military action in Afghanistan, Iraq, Libya, Syria is in millions.

The horrors of Guantanamo Bay, Abu Ghraib, Bagram, house-to-house searches, soldiers urinating on dead bodies, torture, rape and worse – and all heaped upon a hapless people for no fault of theirs. Three totally functional, efficient dictatorships, Iraq, Syria, Libya were wilfully dismantled.

My first memory of West Asia was Beirut in 1970 where even the first secretary at the Indian embassy, Barakat Ahmad, was a man of the highest culture and erudition. Paris moved to Beirut in the winter – everything, from Rudolph Nureyev, Marcel Marceau, to the crazy Horse Casino. In any case, all that glittered in Las Vegas, acquired an elegance at the Casino de Liban.

Edward Said, Iqbal Ahmad and Faiz Ahmad Faiz were only one of the many intellectual groups dotted along the coastline and the lovely mountains. Beirut was good for skiing and swimming within the space of an hour. And, was there a rendezvous for the finest minds, better located than the St. Georges hotel? The coming of the Ayatullahs in Tehran in 1979, the transformation of Nabi Berri’s Amal into Hasan Nasrallah’s Hezbullah, the horrors of Sabira and Shatila, refugee camps, the 1982 invasion by Ariel Sharon, dismantled the world’s most elegant metropolis.

Cairo’s intellectual life revolved around Nasser being interpreted by Hasnain Haikal every week in the Al Ahram. Jerusalem and Tel Aviv were softer places, conditioned by the cooperative socialism of the Kibbutz. Fa Giladi, the Kibbutz in the shadow of Mr. Hermon, was one of the world’s most exquisite locations for meetings and reflection. But it can be functional only in conditions of regional peace.

Baghdad, Damascus and Tripoli were intellectually suffocating because they were closed societies. But they were efficient in every sense, including intelligence. Every detail of the meal I had had quietly in Nablus was trotted out by Saddam Hussain’s director of public relations, almost as a demonstration of his virtuosity.

Hospitals, schools, colleges, Institutes of technology, were all manned equally by men and women in Iraq, Syria and Libya. The 1,000 mile highway from Amman to Baghdad was like an endless billiard table.

Religion was at a discount in Baghdad and Damascus. In Tripoli, Mullahs were taboo. The most educated man in the neighbourhood could lead the Friday prayers. The world’s first military academy for women was built by Muammar Qaddafi. His two body guards were women. The cradle to grave welfare system was incomparable.

And you went and recklessly destroyed these societies on trumped up charges of weapons of mass destruction and a seering desire in Western hearts to build democracies everywhere except Riyadh, Amman and Rabat. David Cameron should be brought before TV cameras along with former Army Chief David Richards with whom he had bruising encounters on the invasion of Libya, which is at the heart of the problem plaguing Cameron.

What Rezgui did was horrible and can never be condoned. But do recall the discussion in the House of Commons when British intelligence was found meddling in Libya. Should not Prime Minister Cameron be suitably exposed once again for having pushed the country over the precipice in a North African theatre which has bred anger and rage in the likes of heaven knows how many Rezguis yet to be brought into focus as bleak and shoddy villains of history.