Pope Francis urged Russia’s President Vladimir Putin to make “a sincere and major effort” for peace in Ukraine, which together with the Middle East was the focus of talks between the two leaders at the Vatican. 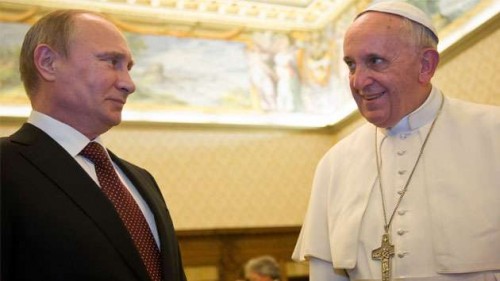 “Regarding Ukraine, the Holy Father stressed that a sincere and major effort is needed to achieve peace,” said Vatican spokesperson Federico Lombardi.

“As it was possible to predict in the context of the world situation, the talks were dedicated principally to the conflict in Ukraine and the situation in the Middle East,” Lombardi said.

The Holy See is highly concerned at the fate of the Christian minority in the Middle East and and anxious to protect it while nations work for peace in the region, he said.

Francis underlined to Putin the importance of rebuilding a climate of dialogue over Ukraine and that both sides committed to the Minsk accords, Lombardi stated.

The accords call for a ceasefire between Kiev forces and pro-Russia separatist rebels as well as constitutional reforms to protect the rights of people in eastern Ukraine.

While Francis has deplored the loss of life in Ukraine in the conflict between Kiev and pro-Russian rebels, he hasn’t publicly blamed Russia in an apparent bid not to upset the Holy See’s delicate relations with the Orthodox Church in the country, where Catholics are a tiny minority.

Francis and Putin greeted each other in German and posed for photographers sitting at the pontiff’s desk in the papal library before holding closed-door talks for 50 minutes through interpreters.

The Pope presented Putin with a medallion depicting an ‘angel of peace’, a gift is make to other VIP visitors, while the Russian president gave the pontiff a depiction embroidered with gold filament of a church which was destroyed in the Soviet era and later rebuilt.

In a rare breach of protocol for VIPs paying a call on the Pope, Putin and his 10-strong delegation arrived an hour and 20 minutes late for his meeting, after flying to Rome from a visit to the Expo trade fair in Milan.

“It was a great pleasure, an honour to meet you,” Putin told Francis as he took his leave.

During a meeting between Putin and Italian Premier Matteo Renzi at Expo, Renzi heaped praise on Russia, calling it a crucial player in international anti-terrorism efforts and sought Putin’s help in ending the civil war in Libya which has worsened the migrant crisis in the Mediterranean.

Renzi did not criticise Russia’s involvement in the Ukraine conflict, saying simply that they had agreed there must be full implementation of the Minsk accords.

Putin urged an end to punitive Western sanctions, stressing how these were hurting Italian businesses.