Pope Francis has called for “an end to discarding people” and said that given so much hunger in the world, we must not simply say “the accounts don’t balance” but rather feed the poor….reports Asian Lite News. 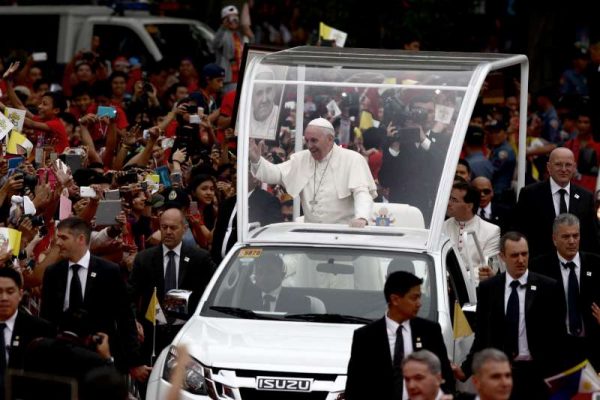 “Faced with so many kinds of hunger in our world, we cannot say to ourselves: ‘Things don’t add up; we will never balance the books. There is nothing to be done.’ Because then despair takes over our hearts,” he said during a huge Mass he celebrated in this eastern Bolivian city.

Before hundreds of thousands of people in Christ the Redeemer Park, the pontiff criticised what he said was the logic of consumerism or discarding things, including one’s fellow man, that is trying to impose itself upon the world.

He used the biblical story of the loaves and fishes, when Jesus’s apostles wanted him to send the crowds away because there would be no way to feed all of them, but he multiplied the food on hand and there was enough for all.

The Argentine pope said that the story had particular “resonance” in the modern world, telling his listeners: “No one needs to go away, no one needs to be discarded; you yourselves, give them something to eat. Jesus speaks these words to us, here in this square.”

The pontiff said that the logic of materialism results in everything becoming an object that can be bought and sold, consumed and negotiated. It is, he said, a logic that leaves space for very few, discarding everyone else who does not produce, those who are not considered to be capable or worthy because apparently the “numbers don’t add up”.

Francis said that in Bolivia the richness of a society is measured “in the elderly who manage to transmit their wisdom and the memory of their people to the youngest”.

He also praised mothers, who during his visit to the poor South American nation he said he had seen “carrying their children on their backs”.

“Carrying upon themselves the life, the future of their people. Carrying their reason for joy, their hopes. Carrying the blessing of the Earth in their (children). Carrying the work performed by their hands,” he continued.

“But also carrying on their shoulders disappointments, sadness and bitterness, injustice that seems not to stop and the scars of unrealised justice,” he continued.

The mothers of Bolivia, he said, “carry upon themselves the memory of their people”.

Francis urged his audience to always retain that memory because losing it “disorients us, it closes off our hearts to others, especially to the poorest”.