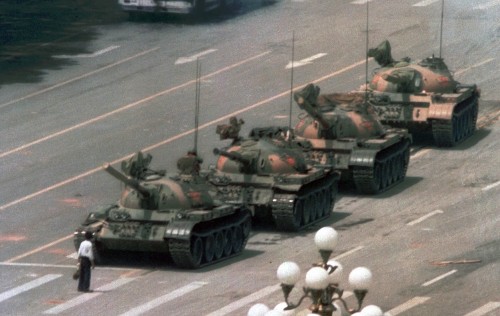 The 26th anniversary of the Tiananmen Square crackdown that brought a tragic end to student-led pro-democracy protests in 1989 was marked by China’s silence and appeals from abroad to assume responsibility and clarify the incident.

For the hundreds of tourists visiting the iconic plaza it was just another day to visit the Forbidden City or pay their respects to Mao Zedong’s embalmed body, Efe news agency reported.

Incessant rains did not stop tourists, mostly foreigners, from making the customary visit to the plaza after passing through strict security controls that have been put at all the accesses to the square.

Before 2013, these controls only made an appearance on anniversaries of the Tiananmen massacre or other sensitive dates for the Chinese government but since an automobile entered Tiananmen and ran down pedestrians that year, the controls are a permanent presence at the site.

There is no mention of the anniversary in the country’s media, that seems to be adhering to the Chinese government’s policy of downplaying the incident of 1989.

“The great achievements China made during the past 30 years in the practice of reform and opening-up have shown that China’s development path is absolutely correct, and wins resolute supports from 1.3 billion Chinese people,” said foreign ministry spokeswoman Hua Chunying early this week.

The Tiananmen Mothers activist group, comprising over a 100 family members of the victims of Tiananmen, have written an open letter to the Chinese government this year asking it to reopen public debate on the incident.