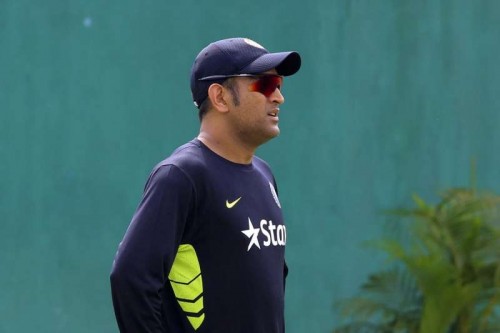 Mahendra Singh Dhoni is always a step ahead of the Indian media. He is not the sort who would habitually say when the team loses that they batted badly, bowled poorly and fielded atrociously! Like a good general he, by and large, defends his forces.

He anticipates the questions likely to be arrowed at him and is prepared with his defence. He is smooth-tongued and doesn’t pull his punches. All this was evident when he took the media on after India’s first series defeat to Bangladesh on Sunday.

Dhoni is not one to get flustered when bombarded with uncomfortable questions, never mind that he may not be always convincing with answers, yet he is firm.

He knew his captaincy will be under scrutiny and said so with a bit of sarcasm after successive defeats in Bangladesh. He didn’t hem and haw, he was forthright: “I know the media really loves me. These are the questions that will keep popping up.”

Dhoni knew that Bangladesh outplayed his team and took the responsibility for the bad losses. Bangladesh fully deserved their success without any riders or reservations.

“Yes, if it is a justifiable thing that if you remove me and Indian cricket will start doing really well and if I am the reason for all the bad that is happening to Indian cricket, definitely I would love to step away and play as a player. Ultimately you want India to win. It doesn’t matter who is captain. I was never really in line to become a captain. It was a job or responsibility for me. I have taken that responsibility. It was given to me, I took it. If they want to take it away, I am happy to give it away.”

He is right, no team can win every series, but the fans don’t expect the Indian team to lose to Bangladesh. He sounded more like he was making a farewell speech, though he didn’t thank the media, quipping like former England captain David Gower did, from the “heart of my bottom”.

If Test captain Virat Kohli thinks no end of Ravi Shastri as team director and his motivational abilities, Dhoni came out in support of Duncan Fletcher, as if to put the record straight by defending the Zimbabwean’s hard work in the background. He is not ungrateful to a man who suffered a lot of indignities for the team’s showing in the last four years. Some former players appeared to criticise him because they did not like his pout or his hairstyle!

Dhoni quickly added that there is nothing wrong with the present support staff and there is no need to hurry in appointing a successor to Fletcher. He is not the first one to say that every coach has something to offer, including Greg Chappell, provided you know how to interact and be receptive. By the way, Chappell thought both Dhoni and Dinesh Karthik have leadership qualities.

Rahul Dravid as captain had a lot to say about Chappell’s cricketing brains whatever the Australian’s other human failings. Likewise, he also thought highly of Fletcher. A lot of Dravid’s senior colleagues also saw virtues in John Wright and Gary Kirsten as coaches. Someday, Dhoni too would elaborate on the qualities of some of these coaches.

Before crucifying Dhoni and the team, one has to pause and look at Bangladesh’s performance in the last couple of years. They won series against West Indies both at home and in the Caribbean, beat New Zealand in seven matches in a row and blanked Pakistan recently.

The three teams are not worse off than India when seen in the context of One-Day Internationals (ODI). If a team is on a 10-match winning sequence there has to be something in them even if they are playing in their own backyard.

Dhoni is right, the pitches were not conducive to strokeplay, notwithstanding the argument that international teams are expected to adapt to the local conditions. Just play out the number of false strokes the usually aggressive Rohit Sharma, Shikhar Dhawan and Virat Kohli got out to in the two games.

Obviously, they found it difficult to adjust to the pace of the wicket, and the impeccable line and length bowled by debutant Mustafizur Rahman and his seniors. He became only the second bowler to take five-wicket hauls in the first two matches after Zimbabwean Brian Vitori, who incidentally performed the feat against Bangladesh.

Mustafizur, who did one better by claiming six wickets in the second game, looked deceptive, though some of the dismissals were ugly to watch. No wonder they played with four pacers, knowing the conditions all too well whereas the Indians had bowlers who could touch 145-150 km but without proper direction.

Not many would go along with Dhoni on not playing Stuart Binny who could have been the right-handed version of Mustafizur on the prevailing pitches and atmospheric conditions. The skipper went for Dhawal Kulkarni, who is pacier than Binny.

Rahane should have been given another chance to adjust to the slowness of the pitch. As for picking three spinners, Dhoni was proved right as the ball turned throughout the day, but Axar Patel proved expensive.

Ravindra Jadeja has been Dhoni’s Achilles heel ever since it was revealed that he and Suresh Raina are managed by a company owned by a friend of the captain in which he allegedly has a stake, but it would be as bizarre as Sourav Ganguly coming under the microscope for favouring players managed by a company belonging to a Kolkata-based business friend of his.