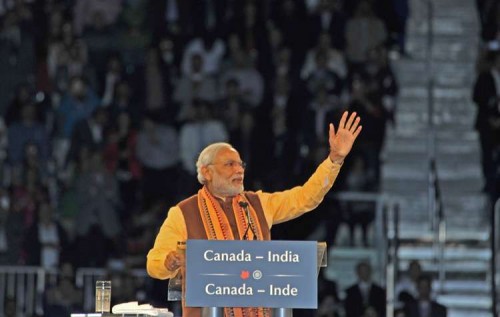 As Prime Minister Narendra Modi’s government completes one year in office, he is under a strident attack from the opposition parties.

But he has not been spared from within. Critical voices within his party and the sangh parivar have begun to raise their decibel level.

He says Modi has failed to address crucial issues concerning various sections of the society.

“He did not address any of the issues which are core to his ideology,” like Ram Janambhoomi and the ban on cow slaughter, Govindacharya said.

What he did attempt to solve were a few corporate issues. Even on the social sector schemes like the cleanliness drive and Jan Dhan Yojna, the prime minister launched them without proper home work.

“What was needed was a committed, motivated structure up to the grass-root level,” Govindacharya said adding that unless such a structure is created, these kinds of social security aspects don’t succeed.

“Announcement wise these schemes were attractive; Image-building wise these were positive; but acheivement wise I feel very disappointed,” the RSS pracharak said.

Without a majority in the Rajya Sabha, Modi tried to manage the opposition on land acquisition bill but failed, he said, adding that it may be too early to assess the performance of the government.

Yet, in a scathing comment on the performance or lack of it, he said the government “should have done something which could have got registered in the minds of the people.”

He said the political leadership was suffering from the handicap of a lethargic bureaucracy which was not attuned to the service concept.

On the black money issue he said that people were getting the impression that it was casual thing, as the BJP president Amit Shah had himself said it was just a “jumla” (platitude or empty promise).

Govindacharya feels that had the government taken a transparent approach, people would tend to trust it. “Instead of that you appear to give the impression that all this was mere election promise to be forgotten later. People don’t forget,leaders may,” he said.

Criticising Modi on his “self praise”, Govindacharya said that he must refrain from patting his own back. “This attitude doesn’t go well with the people. It doesn’t carry any value unless others appreciate you,” he said adding that the work should speak for itself.

“You need not have cheer leaders around you,” the man who’s part social activist, part part political thinker said.

On remarks by Union home minister Rajnath Singh that a Ram Mandir could not be built in Ayodhya since the government did not have a majority in Rajya Sabha, Govindacharya said that when he was asked whether it would build the temple if it had a majority, Rajnath was non-committal. “You are not honest. People can see through this confused approach on Ram Janmbhoomi,” he said.

On the economic front, Govindacharya says he finds no difference as compared to the previous UPA government. “This government is more brazen about entertaining the corporate sector. The group of corporate people which loiters around the prime minister in the country and his trips abroad is very disgusting,” he said.

“If the government claims that it is pro-poor, but is unable to talk to the farmers, while keeping a dialogue going with the corporates, what would the people conclude?” The impression coming through, he says, is that this govt is for the corporate sector.

He said that the new government came to power with a heavy load of expectations. But it has not been able to translate any of its declarations into reality. “There is no indication of achievement, no gesture, only marketing,” he said.