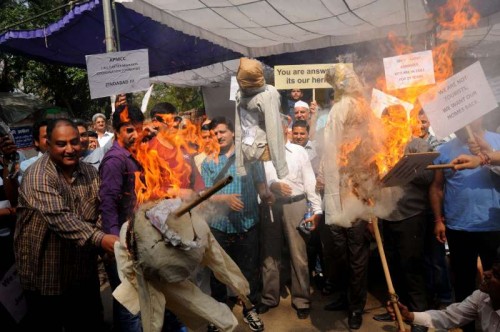 While politicians debate the possible roadmaps for a return of migrant Pandits to Kashmir Valley, the community remains deeply divided over the issue.

H.N. Jattu, 81, president of the All India Kashmiri Pandit Conference, feels this is not right time to return to a place from where Pandits fled in thousands after separatist violence erupted in 1989. Speaking in this winter capital of Jammu and Kashmir, India’s only Muslim-majority state, Jattu said: “The present political atmosphere in Kashmir is against the return of the Pandit community.

“Talking of our return after 25 years is not a joke,” said Jattu, who has been associated with the politics of Pandits for 65 long years. “It would be like another uprooting of the community since we invested every penny we had at places where we live today.”

Jattu says that unless Article 370 of the Indian constitution – which gives special status to Jammu and Kashmir – was abrogated and laws passed by parliament become directly applicable in the state, the return of the Pandits would be a political gimmick.

“Let (Prime Minister) Narendra Modi ensure that Kashmir becomes a part of India in the real sense, and we will return to the land of our ancestors,” Jattu said.

There is a serious difference of opinion among the older and younger generations of Pandits on whether or not a return should even be spoken about now.

“For my wife and I, it is nostalgia. It is roots, it is memories, it is faith and it is everything else,” said G.L. Daftari, 67, a retired State Bank of India officer who too lives here.

“But for my son who is working in a private company in Delhi and who has to leave at 6 in the morning and return at 11 at night, where is the time to think about roots?

“I would like to return to live for whatever little is left of my life, but my son and daughter need economic guarantees besides security and political certainty,” Daftari said.

Political assertion seems to override emotional issues for those members of the community who formed groups and forums to agitate for the cause of the Pandits in the early 1990s.

Kuldeep Raina, general secretary of Panum Kashmir, rejects the idea of composite townships, clusters and the return of migrant Pandits to places where they lived before 1990.

“We adopted a resolution in December 1991 called ‘Marg Darshan’ seeking the creation of a union territory to the north and east of Jhelum River with free flow of the Indian constitution,” he said.

“Article 370 should be abrogated. Anybody who believes in the free flow of the Indian constitution should be allowed to live in that union territory,” Raina said.

Asked if the idea of a union territory would have takers among the young in the community who have found assimilation and employment in different parts of India and abroad, he said, “There should be economic guarantees for such youths for their career development.”

What elders like Jattu, Daftari or Raina believe is Greek to the ears of the young Pandits who have hardly any memories of the eclectic culture their parents were born in.

“What return are you talking about? I earn around Rs.2 lakh a month. You want me to give the so-called eclectic culture a try by giving up a secured career?” asked a young IT Kashmir Pandit professional working in Bangalore who obviously did not want to be named.

Other younger Pandits may not be so cynical but they also do not want to discuss the return of the community with any seriousness.

“A bird in hand is worth two in the bush. We have been thrown out. The basic dispute would take centuries to resolve. I do not believe the return is ever practical or possible”, said Sanjay Koul, 29, another IT professional working outside Jammu and Kashmir.

Kashmiri separatists say they are not opposed to the return of Pandits to the Kashmir Valley but there must be no separate townships for them.