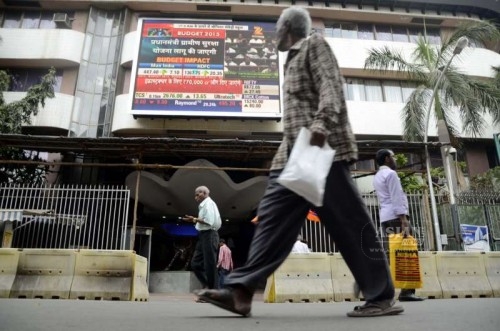 From an all-time high that was touched in the first week of March to the latest trading day, two key equity market indices have taken a beating of around 12 percent. This, at a time when India’s growth forecasts have been upgraded by a host of global financial institutions.

Till mid-April, Nifty was still comfortably placed at 8,850 points. But there onward the fall began. This was also when foreign funds turned net-sellers. Having bought Rs.48,194 crore worth of equities in the first four months of 2015, they pulled out Rs.7,078 crore from May 1 to June 12.

“The premium valuation of some stocks, lack of reforms momentum, the private capex and consumption not taking-off, and the central banks’s reluctance in cutting rates further have been other reasons for fall,” Nevgi said.

Sachin Shah, head of Emkay PMS elaborated that sometime around January-February 2015, the markets valuations were running a bit ahead of time, considering the third quarter results, which clearly showed the trends of lower aggregate demand.

“In the fourth quarter, the markets once again got the confirmation of a slowdown in consumption. Markets gave therefore corrected to factor-in low economic and earnings growth in the short-to-medium term,” Shah said.

While weakening of rupee against dollar, forecast of less than average rainfall, Greece default and the expectation of US Fed rate hike by September were others for the downward trend Gaurav Jain, director of Hem Securities cited.

Even the impact on the markets, thanks to the dramatic win for Prime Minister Narendra Modi-led Bharatiya Janata Party (BJP), which was perceived as being the most business-friendly, also seemed to have been waning.

“There is generally a lag between expectation and reality. In the new government’s case, the expectations had risen way bit quickly,” said Anand James, co-head of technical research with Geojit BNP Paribas.

He said foreign investors also got worried and began to pull out funds as since they felt that the government’s failure to push key reforms — like the two crucial bills on goods and services tax and land acquisition — due to lack of majority in the Rajya Sabha, the upper house of parliament.

“Issues such as policy normalisation by the US Fed and weak Indian macros and micros, hare making investors to roll back their long trades,” said Anindya Banerjee of Kotak Securities, adding also that the hang-over effect of the cocktail of a major political change was also getting cured.

But Shah and other analysts felt the markets still hope the government will be able to push some major reforms. They said the coming six months will prove if investor confidence is re-built with massive spending on infrastructure and companies manage to improve their balance sheets.

Banerjee said improvements are also necessary on ease of doing business and access to funds. “The financial system is to the economy, what an engine is to a car. Unless it is cleaned and oiled well, the engine will keep breaking down,” he said.

“Another major trigger will be the timing of the US Fed rate hike — before or after September,” said James. “A steep and sustained rate hike may turn out to be negative for Indian markets. But that’s not anticipated at this point of point.”