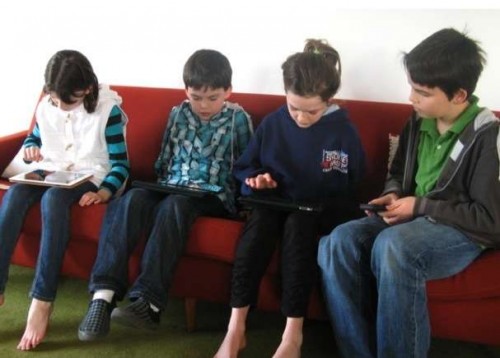 The Youth Sports Trust report suggests that nearly a quarter of children see playing computer games with friends as a form of physical activity.

The trust called for technology to be integrated with PE in schools.

The government said it had given schools £300m to improve school sport, and PE was a priority.

The Leicestershire-based trust describes itself as an independent charity devoted to changing young people’s lives through sport.

It commissioned a survey of children’s attitudes to sport, as part of its report on the future of sport in schools.

This poll of 1,000 five- to 16-year olds suggested 75% of young people enjoy PE at school, and two-thirds feel better after taking part in sport.

But the survey revealed the scale of the challenge from digital technology.

Some 23% of children said they viewed playing a computer game with a friend as a form of exercise.

And a third said they spoke to their friends more on social media than in person.

The report – The class of 2035: promoting a brighter and more active future for the youth of tomorrow – said “there is no resisting” the march of technology.

“Policymakers can feel nostalgic for a time before the challenges new connected technologies have brought in engaging young people, or they can harness these technologies to their advantage,” the report said.