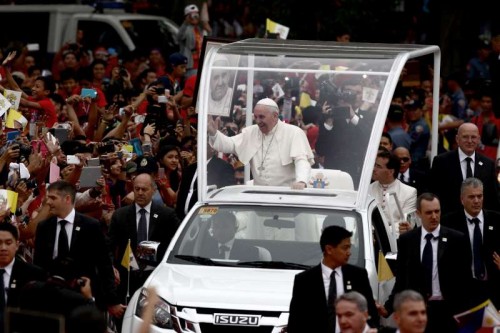 Pope Francis  held mass for tens of thousands of Catholics at a stadium in Bosnia-Herzegovina’s capital city of Sarajevo.

The Eucharistic Celebration is estimated to have been attended by about 65,000 believers of whom around 34,000 were from the country, 23,000 from Croatia and around 2,500 from Serbia. The rest were from other countries, Sarajevo Times reported.

He arrived in Sarajevo earlier in the day. He was welcomed by Bosnian Croat politician and leader of the Croatian Democratic Union of Bosnia-Herzegovina party, Dragan Covic.

Speaking to reporters on his flight to Sarajevo, Pope Francis described Sarajevo as the “Jerusalem of the West”.

“It is a city of very different ethnic and religious cultures. It is even a city that has suffered much during its history. Now it is on a beautiful path of peace. I am making this trip to talk about this, as a sign of peace and a prayer for peace.”

The last visit by a pontiff to Bosnia-Herzegovina was by Pope John Paul II, who travelled to Sarajevo during a severe snowstorm in 1997.