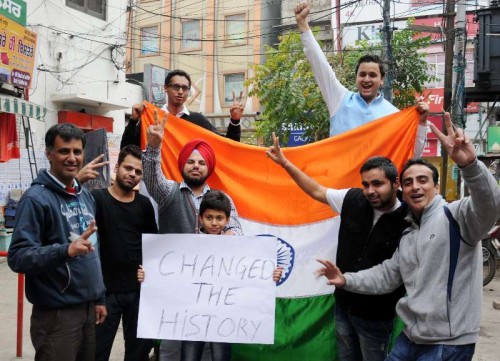 It is natural to go ga-ga over India’s victory over South Africa at the MCG  — because this is the first time they have beaten the Proteas in a World Cup match after losing at all their three previous meetings.

Yet, to disprove the critics, India have done everything they looked incapable of doing just a month ago. They batted beautifully, bowled purposefully and were amazingly athletic in the field. Otherwise it is well nigh impossible to beat the Proteas by 130 runs and that too in a key World Cup game that may as well decide who tops the group.

To win back-to-back matches so convincingly is no joke and the Indians kept up the momentum so well. Playing Pakistan drains an Indian team and then to be taking on South Africa can be further demanding.

The big revelation was the way the fast bowlers fielded. First, Shami took a splendidly well-judged catch on the boundary off Mohit Sharma who also got top-scorer Faf du Plessis to make sure the South Africans have no pretensions of a late fightback.

Then the turning point in the match when Mohit’s brilliant throw from the outfield ran AB de Villiers out. The pick up and release of the ball was so quick and precise that MS Dhoni had to just give the finishing touch.

As if that’s not enough, Umesh Yadav showed the strength of his throwing arm to get rid of another dangerous batsman David Miller, who had bailed the side out along with JP Duminy against Zimbabwe — both scoring hundreds.

The two run-outs effected by the two pace bowlers shows that the Indian fielding has gone up by a notch or two and, as Dhoni said in his post-match comments, they made his life easy in implementing team plans and not worry about hiding slowcoaches. Not many may have noticed that all 10 Pakistani batsmen were out to catches at Adelaide.

Shikhar Dhawan and Virat Kohli continued their rebuilding work from the Pakistan match after Rohit Sharma was unlucky to be run out with de Villiers finding one stump to aim good enough.

Shikhar found Ajinkya Rahane, who came in to bat in the 50th over against Pakistan, in a more belligerent mood. His phenomenal strike rate (79 off 60 balls) gave India a 300-plus total to breathe easy. What’s pleasing about Rahane is that, like Rahul Dravid and VVS Laxman, he looks so graceful playing cricketing shots — not for him the ungainly slogging. Moreover, he looks as assured as Kohli at the wicket to calm the dressing room.

Dhawan, who was struggling to get into the line to middle the ball, made some course correction — as he himself said after the match — and suddenly he looks in good nick. Come to think of it, quite a few thought Murali Vijay should have been retained sending the Delhi southpaw back.

India beat South Africa in the 2013 Champions Trophy and Dhawan scored a century then, too. The MCG victory is India’s third biggest win against South Africa.

Dhawan, whose family resides in Melbourne, batted as if he has been playing his cricket all through at the MCG. His driving and pulling were impeccable on this day. He and Kohli ran well too to unsettle the field.

South Africa, who have never won a World Cup match chasing more than 260-odd runs, found the Indian bowlers not in an obliging mood. What many people do not seem to realise is that Umesh Yadav and Shami are as pacy as the best in the business elsewhere but they are not overbearing as the others — they are highly effective nevertheless.

The South African crash was sudden and swift. The dismissal of de Villers seemed to have unnerved the batsmen who followed him. After his exit, the match was over in the next 10 overs or so when the Proteas lost six wickets for 48 runs.

There was worry that India would not be able to strike in the middle overs. This day, however, Ashwin, Jadeja and Mohit not only contained the batsmen bowling a perfect line, they also got wickets. The off-spinner claimed three and it was coming after his tight bowling against the Pakistanis.

Importantly, India have found their team composition right straightaway. Playing with five bowlers and Dhoni batting at six is no longer a worry. The South Africans are in a dilemma whether they should think of playing a seventh batsman as they found their tail too long for their comfort.

The 86,876 spectators who turned up at the MCG — a overwhelming majority of them Indians — partied inside the historical venue and perhaps well into the wee hours of the new week.