India came back strong and dominated with an all-round performance to win the third One-Day International against Bangladesh by 77 runs at the Sher-e-Bangla stadium here . 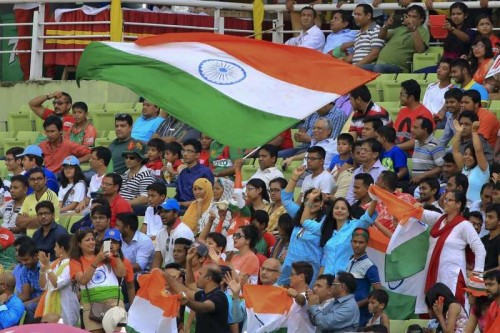 The hosts, however, clinched the three-match series 2-1 having won both the earlier matches.

For Bangladesh, Shabbir Rahman top-scored with a knock of 43, while Suresh Raina picked up three wickets for 45 in eight overs.

In reply to India’s challenging total, the hosts were jolted early as Dhawal Kulkarni picked up the hard-hitting Tamim Iqbal (5) in the second over of the innings.

But Tamim’s opening partner Soumya Sarkar ensured that his side were off to a bit of a flyer as he struck a flurry of boundaries.

Just when Sarkar (40) looked set for a big score, the team in blue struck sending him back to the pavilion.

Litton Das and Mushfiqur Rahim then got together to knit another useful partnership of 50 runs the latter then edged one to India skipper Mahendra Singh Dhoni off a Suresh Raina delivery with the score reading 112/3.

Das also fell thereafter as a fast delivery from left-arm spinner Axar Patel crashed onto his citadel with Bangladesh struggling at 136/4 in the 25th over.

Shakib Al Hasan (20) for once missed out in the series as he spooned one to long-on two overs later.

With India in the driver’s seat, the pair of Nasir Hossain and Rahman tried to take the game by the scruff of the neck with some brave and lusty hitting.

Rahman was the aggressor as he clobbered his way to a 38 ball 43 but was clean bowled by Stuart Binny in one of the turning points of the game.

The Bangladesh innings stuttered after that as they kept losing wickets with the batsmen succumbing to the scoreboard pressure.

Earlier in the day, opener Shikhar Dhawan (75) top scored for the visitors who also had notable contributions from Dhoni (69), Ambati Rayadu (44) and Raina (38).

For Bangladesh, skipper Mashrafe Mortaza was the pick of the bowlers with figures of 3/76. Teen sensation Mustafizur Rahman finished with 2/57.

The visitors were off to a very cautious start and the openers looked steady from the very start. Right-hand opener Rohit Sharma managed to pick up a few early boundaries.

However, Rohit, going for a booming drive, edged one to the keeper (India 39/1). The wicket took Mustafizur’s tally to 12 victims in only his third outing.

The pair of Dhawan and No 3 batsman Virat Kohli then steadied the innings as they put on 75 runs for the second wicket in 12.5 overs. Kohli (25) began sedately but then fell to a Shakib Al Hasan delivery, getting bowled while attempting a big sweep.

Dhawan, unfazed with the loss of the two wickets, continued belting the bowlers to the ropes with Dhoni by his side who again promoted himself to the No 4 spot after batting at that position in the second ODI.

Dhoni was aggressive from the very start and steered India to 145/2 at the halfway stage.

Dhawan then fell after adding a few more runs to the total as he pulled one straight to mid-wicket off a Mortaza delivery in the 27th over.

His dismissal prompted Dhoni to take the batting powerplay he teamed up with Rayadu and consolidated.

The latter settled in nicely and was inching towards a half century but was controversially adjudged caught behind off a Mortaza delivery.

The experienced Raina took over charge after Rayadu’s exit and gave the Indian innings momentum with some meaty blows and, despite Dhoni’s untimely dismissal in the 46th over, guided the team to a challenging total.