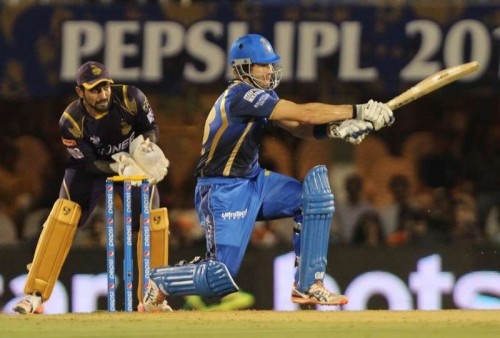 Rajasthan Royals’ all-rounder Shane Watson, who scored a classic century  to take his team to the IPL playoffs, has heaped praise on team mentor Rahul Dravid, saying the batting legend’s humility is something which all young cricketers need to observe and learn from.

“Rahul is an incredible man. The humility that he shows is a great thing for all young cricketers to be able to see and learn from someone who has been in absolute peak of his game. Obviously being in a cricket loving country, and still able to hold oneself with such humility is a great example for every young cricketer to be able to learn,” Watson said in an email interview.

“From his coaching perspective, he is more trying to make sure we are not putting an added pressure on ourselves. Just go about there and express ourselves to the best of our ability and try and do that every single time.”

Watson applauded in-form batsman Rahane for continuing to grow as a cricketer and person as well.

Rahane is currently in the form of his life scoring runs both in India and abroad in all formats of the game. He is now the second top run getter in the ongoing Indian Premier League (IPL).

“It is great to see Ajinkya continue to grow as a cricketer and a person as well. When he came to Royals we exactly knew the potential he had in him,” he said.

“The year he had with India in all formats of the game, also in the World Cup and now continuing it with Rajasthan Royals here as well, is just incredible. It has been a pleasure to see someone playing at the top of the game. I think he will continue to score more for a long time as he is hungry for runs,” Watson said.

Speaking about A Sanju Samson, Watson rated the 20-year-old as the most talented young batsman he has ever come across.

“Sanju is the most talented young batsman that I have ever come across. I first saw him when he was 18. It’s great to see how much control he has got in his batting skills. He effortlessly hits the ball so far and under pressure how clear his mind is, that is something I have never seen in someone at such a young age, he said.

“He is a very very special talent. There is no doubt that at some stage he will show his skills on the international stage as well, as with such incredible gifts the world needs to see it.”

Watson, who is the second player after Ricky Ponting to have won back-to back Allan Border Medals in 2010 and 2011, has been with the Royals since the inaugural season way back in 2008.

Speaking about the eight-year journey, he said: “It’s incredibly comfortable for me to be with the Royals every year. The owners and management have been incredibly good to me.

“All the different players who have come and gone these years and who are here now in Royals, the friendships that I have been able to build and the impact they have had in my life is just incredible.”

The Australian led the Royals in the early stage of the 2015 IPL season but midway handed over his captaincy to teammate Steve Smith in order to concentrate entirely on his batting and bowling.

“Look, it has been an absolute privilege to lead the Royals for the couple of games. It’s an incredible tournament to be a part off, I love coming and playing here.

“I have learned a lot myself as a leader and also as a person outside of cricket. Like I ended up stepping down as Royals skipper as I wanted to concentrate on my bowling and my batting which is the most important thing to me as an all-rounder,” a confident Watson said.

Watson, along with his Royals teammate Steve Smith, James Faulkner, was part of the victorious Australian World Cup winning squad earlier in the year. The trio helped their national side clinch cricket’s biggest prize for the fifth time.

About the splendid memories he had after winning the World Cup, Watson said the greatest memories I have is after we won the World Cup, and then walking around the fully packed Melbourne Cricket Ground with fans celebrating. We wish we could have paused that moment in time and sort of be in that forever.