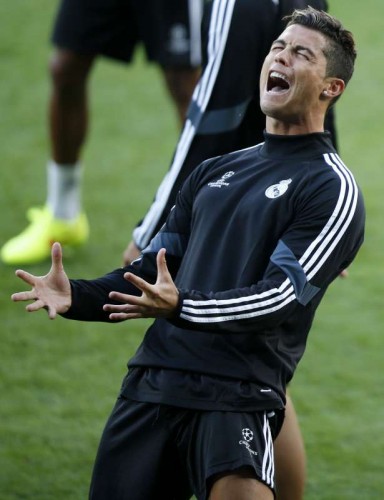 With the fans still euphoric after their heroes clinched the Serie A title last weekend, Turin’s Juventus stadium was already rocking even before the side confounded expectations by starting the match with an offensive push on Tuesday, reports Efe.

Real Madrid, hoping to repeat after taking home their record 10th Champions League trophy last year, gave no sign of panicking and denied the home side any further shots on goal for the rest of the first half.

Cristiano Ronaldo made his presence felt in the 27th minute, heading-in a perfect pass from James Rodriguez to level the score at 1-1.

The Portuguese international’s ninth goal of the 2014-2015 Champions League campaign brought his career scoring total in the elite competition to a record 76, one more than FC Barcelona’s striker Lionel Messi.

The equaliser invigorated the Spanish team, who were the better side for the rest of the half and nearly took the lead before the break, when James’ header bounced off the crossbar.

Continuing to press in the early minutes of the second half, Real Madrid saw a chance to take the lead go disastrously wrong.

Madrid sent almost everybody forward on a corner kick, only to see the clearance go to Tevez as he motored toward the Real goal, where Casillas was supported by only two defenders.

When Marcelo moved to cut off the oncoming Morata, Dani Carvajal made a clumsy tackle on Tevez in the area, giving up the penalty.

Guessing wrong, Casillas went left as Tevez fired the ball straight down the middle to make it 2-1 for Juventus in the 57th minute.

Real Madrid coach Carlo Ancelotti shuffle his line-up, adding Javier “Chicharito” Hernandez as a third forward in a bid to get even for the second time in the match.

The Italian club contained the normally potent Madrid attack for most of the rest of the match, though Real Madrid could take some consolation from not denying Juve on several occasions to keep the winning margin at one.

The second leg is set for next week at Madrid’s Santiago Bernabeu Stadium.