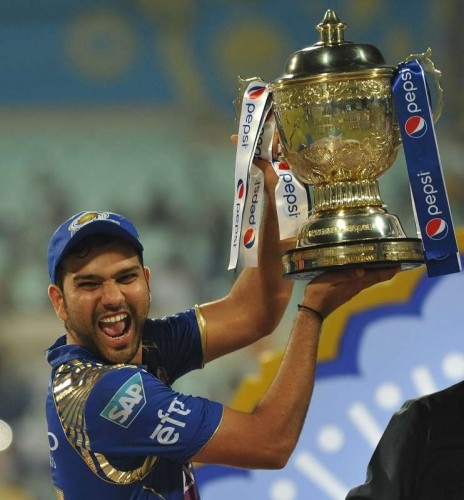 As Mumbai Indians captain Rohit Sharma held the Indian Premier League (IPL) trophy aloft on a Sunday night sky filled with fireworks, one could very well fathom from the roar of the crowd the undeniable love that one of the world’s most iconic venues has for this man.

Eden Gardens has never allowed Rohit Sharma to return empty handed. It’s like a date where a lover keeps on pulling out surprises and that’s exactly what the ground has done with the right-hand bat.

“Nostalgic? Yes. It’s always been good here. Whenever I have come here, I have taken happy memories back,” Rohit said after the win.

It started in April 2013, two years back when Rohit went up on stage to lift Mumbai Indians’ maiden IPL crown. Though he failed to score runs with the bat then, he was proud to have led a side for the coveted domestic trophy.

In the earlier edition, the prolific India opener had scored an unbeaten 109 against the Kolkata Knight Riders (KKR) at the ground.

A few months later in 2013, he was back here making his Test debut against the West Indies. The craze and hype then was all surrounding Sachin Tendulkar for whom it was his penultimate game, but his fellow Mumbaikar wielded the willow with some style, blasting a memorable 177 runs.

The next time Rohit came out to bat at the historic venue was in a One-Day International (ODI) against Sri Lanka. He kept on tonking and hammering the hapless islander bowlers to every part of the ground and finally finished with 264 runs – the highest individual score in ODIs.

From two international games, the Mumbaikar averages a stupendous 220.50 here.

Though his side was beaten by KKR in the first game of this year’s IPL, Rohit smashed his way to an unconquered 98 and then in the final on Sunday he forged a 119-run second-wicket partnership with Trinidadian batsman Lendl Simmons that took the game away from the opposition.

Rohit looked solid from the start but then fell just after his fifty, dragging a slower delivery from Dwayne Bravo straight down long-off’s throat.

An emotional Rohit said he felt like packing the ground and carrying it with him across the world.

“I want to pack it and take it home and then carry it with me wherever in the world I go. This ground has now become extremely special for me; I have achieved so much here and it is very close to my heart. I don’t know why this ground is so special for me and I don’t even want to know as long as I keep coming here and perform the way I have so far and keep winning trophies,” he added.