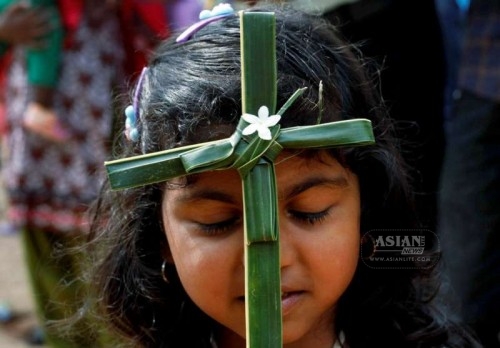 Tension prevailed in a village in Haryana’s Hisar district  after an under construction church was attacked and vandalised by miscreants and the idol of a Hindu god was placed inside the premises on March 6.

The police later took away the Hanuman idol and a red-coloured flag related to Lord Ram from the premises to prevent the situation from getting out of hand.

Police officials said on Monday that 14 people were booked for rioting, damaging place of worship, theft and promoting enmity following a complaint lodged by the church priest on March 13 in Kaimri village in Hisar district, 260km from here.

No arrests have been made so far.

The attackers damaged the cross at the church and allegedly took away some other items.

The priest told media that certain activists of the Bajrang Dal and others had threatened him earlier. He alleged that the same people could be behind the attack on the church.

“I was threatened by Bajrang Dal activists and other locals last month,” the priest, Subhash Chand, said.

Haryana has a BJP government since October last year.

Local residents in the village alleged that the priest was trying to construct the church despite the fact that there was no Christian in the entire village.

Villagers said that the church priest had bought the plot to build a house but he started converting it into a church.

They alleged that the priest was trying to convert people in the village and surrounding areas.

The local villagers have called a panchayat (village council) meeting on Monday to discuss the incident. They are likely to oppose any arrests of locals.

“The priest is unnecessarily trying to complicate matters. He has got the case registered against some former sarpanches (village headmen) and others, whom we do not even know. He was illegally constructing the church in the village and vitiating the atmosphere through conversions,” a village resident said.