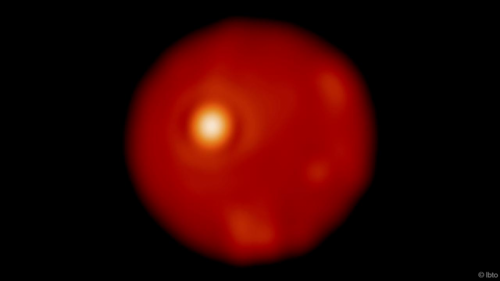 An extremely powerful telescope on Earth has revealed in detail a huge lava lake on Io – the innermost of the four moons of Jupiter discovered by Italian scientist and scholar Galileo (Galilei) in 1610.

Io is the most geologically active body in our solar system. Hundreds of volcanic areas dot its surface, which is mostly covered with sulphur and sulphur dioxide.

Named Loki after the Norse god often associated with fire and chaos, the volcanic feature is called a patera. This is a lava lake with thick lava crust solidified onto it.

This crust periodically sinks into the lake as it fills up with lava, and then it cools off again.

The resulting radiating heat can often be spotted from Earth.

Until recently, Loki, 200 km in diameter and at least 373 million miles from Earth, was too small to be looked at in detail from any ground-based optical/infrared telescope.

The Large Binocular Telescope (LBT) located in south-eastern Arizona has two mirrors that produce images at the same level of detail that a telescope with a single mirror would achieve.

“We combine the light from two very large mirrors coherently so that they become a single, extremely large mirror. In this way, for the first time, we can measure the brightness coming from different regions within the lake,” explained Al Conrad, scientist at the Large Binocular Telescope Observatory (LBTO) that spotted the lava lake.

For Phil Hinz, who leads the Large Binocular Telescope Interferometer (LBTI) project at University of Arizona’s department of astronomy, this result is the outcome of a nearly 15-year development.

The discovery provides clues to the interior structure and plumbing of the moon Io.

It will help pave the way for future NASA missions such as the Io Volcano Observer, the team concluded.

The findings were published in the Astronomical Journal.