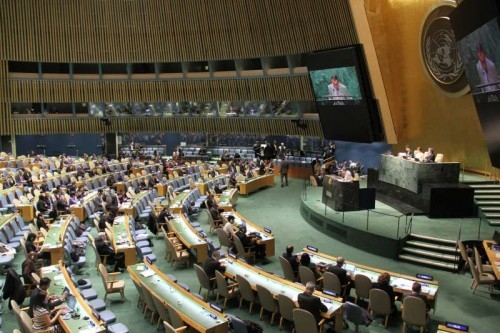 Don’t use universality and shared responsibilities for the environment as pretexts to kick away the ladder of development for the poor or to avoid responsibility for the global ecological havoc, India told the developed nations in a telling message.

“The poor did not cause the problem of climate change, but they are now condemned to bear the brunt of its effects,” Amit Narang, a Counsellor at India’s UN Mission, said at a hearing on the post-2015 development agenda. “Universality and shared responsibilities cannot be a pretext for the abdication of historical responsibility or to legitimize the kicking away of the developmental ladder.”

He also criticised proposals to move the focus of the future development agenda away from poverty eradication to climate change and sustainable development.

Narang invoked Deen Dayal Upadhyaya’s concept of “Antyodaya” – – upliftment of the poorest of the poor – as an expression of equity. “Our responsibilities are common but they are also necessarily differentiated and this notion of equity must be a central creed for collective action in the new agenda” that is being developed to replace the Millennium Development Goals (MDG) set to end this year, he said.

He did not directly mention developed nations or the pressures they are putting on developing countries to cut their carbon emissions at the cost of their development and efforts to alleviate poverty, but the message was clear.

Narang outlined the vision for the declaration the UN’s 70th anniversary summit is to adopt in September and which would form the basis for the Sustainable Development goals to replace the MDG: “A world which is harmony with nature, having halted climate change and altered unsustainable consumption patterns; a world where the poor do not have to pay the bill for the excesses of the rich; a world where the international system redistributes wealth not poverty; a world where every developing country is not just an emerging economy, but an emerged one, a world where there is no North and no South, a world that is truly flat.”

Some have said that it was time to move from “poverty eradication to sustainable development or climate change,” he said. But poverty was still the world’s overwhelming challenge as “some 1.3 billion people, twice the combined population of Europe live a life of absolute poverty,” he said.

“Clearly then, the moral, political, economic, and ethical imperative of eradicating poverty and hunger must be central and undiluted objective of the new agenda,” he said.