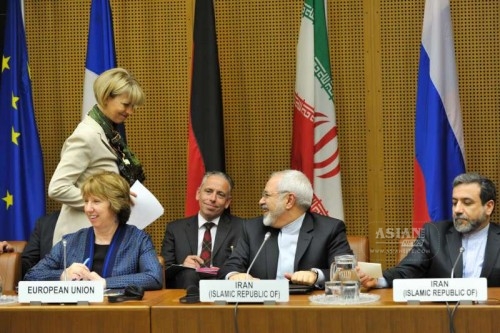 US Secretary of State John Kerry met with the Iranian Foreign Minister Mohammad Javad Zarif for a third day in the Swiss lakeside resort town of Montreux for further nuclear talks before heading to Saudi Arabia.

Later on  senior diplomats from Iran and the P5+1 group, namely the US, Britain, France, Russia, China and Germany, would continue to gather around the negotiation table so as to seek a final and comprehensive deal on Iran’s nuclear program, Xinhua reported.

A source close to the Kerry delegation said that the head of the Atomic Energy Organisation of Iran, Ali Akbar Salehi, and US Energy Secretary Ernest Moniz also participated in the bilateral talks.

According to the source, the next round of ministerial level US-Iran nuclear talks would resume on March 15 to 20 at an undecided place, but the information was yet to be confirmed.

Kerry arrived in Switzerland on Sunday to attend the 28th Human Rights Council session, at which he gave a speech and then a press conference.

On Monday he and his Iranian counterpart gathered again in Montreux for a fresh around of talks over Iran’s long disputed nuclear programme. It was said that the meeting was Kerry’s eighth negotiating session with the Iranians this year.

“We have made some progress, but we still have a long way to go and the clock is ticking,” Kerry said just before heading to Montreux on Monday.

The last round of Iran unclear talks was held from February 21 to 23 in Geneva, in which both Kerry and Zarif participated.

It has been over a year since Iran and the world’s major countries agreed to come back to the negotiating table for the Iranian nuclear programme in 2013.

Under an interim deal between Iran and the P5+1 inked in November, 2013, Iran said it would suspend critical nuclear activities in return for limited ease of sanctions, with all sides seeking a comprehensive deal.

After missing twice self-imposed deadlines, the negotiators agreed in November 2014 to extend the deadline for another seven months, hoping to reach a deal which could be one of the most important and divisive international agreements in decades.