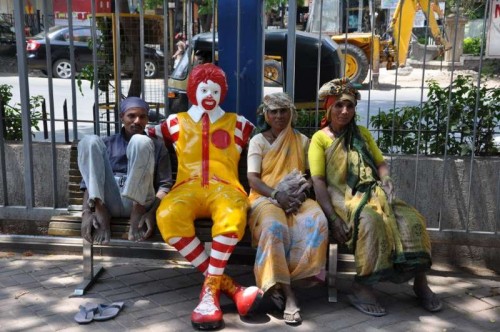 When the pompous staff at a McDonald’s in Pune evicted an eight-year-old street boy from its premises recently, they may not have anticipated the fallout.

It was a Mumbai-based businesswoman, Shaheena Attarwala, and some friends who took the young Akash Pawar to the outlet when he begged for food to eat.

But the adamant staff apparently did not share her charitable intentions and gruffly ordered the boy to leave, despite protests by the kind hostess and other customers.

The staff even cited a ‘high alert’ at the premises, following the 2012 serial bombings in Pune, for their conduct.

As McDonald’s security guards dragged out the boy by his shirt collar, Shaheena bought him a special item on the menu and handed it to Akash who quietly ate it outside.

Later, Shaheena lodged a complaint with McDonald’s. When the incident was highlighted in the media, social networks went wild with calls to discipline, boycott or ban the American fast food giant in India.

Stung by the public anger, McDonald’s immediately ordered an inquiry and suspended at least one security guard.

“We are committed to instilling in all our staff and partners the need to set the highest standards of courtesy and respect. We wish to affirm that we treasure and respect everyone in equal measure and do not support any discrimination,” McDonald’s India said.

This is not the first time the Pune outlet was accused of high-handedness.

Last year, it reluctantly allowed and served a group of Ganesh Mandal volunteers but repeatedly asked them to vacate the premises on the plea that they had depleted their food stocks that night.

In the past three-four days, the Shiv Sena and its affiliates have started taking out street kids and slumdwellers’ children for a treat at various McDonald’s outlets – cocking a snook at the staffers.

A party youth leader in Thane booked a McDonald’s outlet and bought food for 100 destitute kids. The staffers quietly served them as they would to other regular customers.

The Uttar Bharatiya Yuva Manch followed it up with two such outings in Mumbai for street kids in an Andheri suburb.

“We wanted to make a point. The McDonald’ staff behaved very courteously as our activists kept a close watch. They tried to offer us discounts, but we declined and paid the full rates,” Manch Mumbai president Ashok Mishra said.

Now, guided by Shiv Sena legislator Anil Parab, the Manch has threatened to take its campaign to all McDonald’s outlets in Mumbai and other parts of the state.

In contrast to the Pune incidents, the McDonald’s official policy line advocates “high degree of respect for Indian customs and culture”.

McDonald’s operates in around 120 countries and caters to over 67 million customers daily through more than 33,000 outlets.