Indian Prime Minister Narendra Modi remains the third most followed world leader on the micro-blogging site Twitter while External Affairs Minister Sushma Swaraj is the most followed foreign minister, according to a latest study.

The study, which counted data till March 24, is an annual global survey of world leaders on Twitter. It is aimed at identifying the extent to which world leaders use the site and how they connect on the social network.

The study revealed that three most followed world leaders were US President @BarackObama with 56,933,515 followers, Pope Francis (@Pontifex) with 19,580,910 followers on his nine different language accounts, and Modi with 10,902,510 followers.

Since his election in May 2014, Modi’s account has moved into the top three most followed Twitter accounts of world leaders, said Twiplomacy’s Matthias Luefkens. He told IANS that Modi was also among the most effective in terms of re-tweets per tweet. 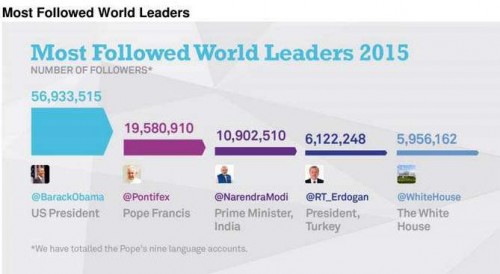 Modi’s huge victory in the 2014 general election was partly credited to a well-organised social media campaign.

Besides, the study found the most followed world leaders have one thing in common: they have discovered Twitter as a powerful one-way broadcasting tool. They are only following a handful of other world leaders, if any, and are hardly conversational which is almost impossible, given the sheer size of their audience.

Among the foreign ministries, the US State Department (@StateDept) is the most followed with 1,7 million followers ahead of the Turkish (@TC_Disisleri), the Russian (@MID_RF) and the French (@FranceDiplo) all with less than a million followers.

The study said it was impossible to say whether governments pay to promote the accounts of their leaders.

But “we have seen an interesting pattern on @IndianDiplomacy (official account of India’s public diplomacy) and @MEAIndia (India’s ministry of external affairs) accounts whose tweets are automatically re-tweeted by an army of 90 tweeps who all follow each other and whose sole purpose is to re-tweet the tweets from @IndianDiplomacy and @MEAIndia, the accounts listed on each of their public Twitter list, aptly entitled ‘RT’,” the study said.

“Thanks to their dedicated action the tweets of @IndianDiplomacy and @MEAIndia are consistently re-tweeted 100 times but rarely favourited,” it said.

The study also showed Rwanda’s President Paul Kagame as the most conversational world leader with 86 percent of his tweets being @replies to other Twitter users followed by Norway’s Prime Minister Erna Solberg.

Conducted by global communications firm Burson-Marsteller, the report studied 669 Twitter accounts of heads of state and government, foreign ministers and their institutions in 166 countries worldwide.