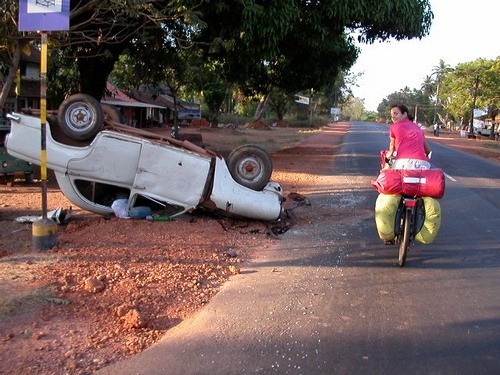 An Indian-American surgeon is on a mission to save thousands of lives that are lost on Indian roads every day with an innovative training programme for trauma first responders using a $200,000 simulator dummy.

Rajasthan University educated surgeon Dr. Dinesh Vyas, an assistant professor in the Department of Surgery at Michigan State University since 2011, estimates that the number of road deaths in India would in 10 years swell four times from current 1,000 a day.

“It’s a shameful figure for me as a physician,” he said in an email interview outlining his strategy that could easily save at least half of the road accident victims, most of whom are sole earning members of their families.

“I can change the trauma situation with my existing team of 40 US surgeons and 50 Indian faculty members in the next four years,” said Vyas.

He visits India four times a year to build up collaboration across the country to make it a self-sustaining process.

Most of Vyas’s team is made up of surgeons and researchers of Indian origin settled in the US and the UK.

They have also formed an Indian American Surgeons Association with close to 1,000 members many of whom are interested in the cause of trauma care.

His team is also in touch with state governments in several states including Andhra Pradesh, Gujarat, Himachal Pradesh, Punjab, Rajasthan and Telangana, 15 medical schools and NITI Ayog to extend the programme across India.

“We plan to start at least 50 centres across India each costing $700,000 with roughly two centres in every state,” said Vyas whose team has trained more than 400 people in the last four months.

Starting cost of the programme is at least $20,000. “Most of it is borne by me and the host institute bears some cost of logistics,” Vyas said.

“We take the simulators on loan at this point from the company at a subsidised rate to keep cost down for the initial phase.”

Some leading corporate houses have also shown interest in the project, he said. His team is also trying to raise money through the CSR funds of foundations interested in Indian road safety or health needs.

“It gives a unique opportunity to NRI academic surgeons to pull together, central and state governments, with various private and government medical schools contributing and building a system for trauma care,” he said.

“Our research team has improvised the programme over the last 7-8 years with more than 20 visits to India and other countries to design the programme and curriculum,” said Vyas.

The programmes are largely conducted in native language with sophisticated simulator dummies and other equipment and educational videos followed by question- answer and video debriefing sessions to enable all trainees to learn from their and others’ mistakes.

Another key feature is that it’s a “Trainer-Trainee programme: meaning we train both trainers and trainees during our visit and observe local trainers educate more trainees,” Vyas said.

“This helps us to identify the most involved, thoughtful, articulate and critical trainers to run and build a sustainable, high quality, motivated programme,” he said.

In addition, a pioneer free multi-lingual Massive Open Online Course (MOOC) for first responders has been designed to reach out to millions of students in all Indian languages through the internet using edcast.com .

Run by a faculty of all dialect speakers from India recruited with the help of the Asian Studies Centre at Michigan State University, “This programme will train and educate people who cannot join the training centres we are starting in India,” Vyas said.