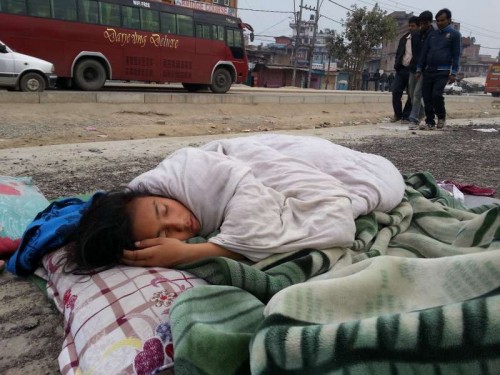 Gaurav Sharma writes on how life changed for ever for a medical engineer as told to him in for UK’s leading Asian newspaper Asian Lite.

The main earthquake, which struck Nepal on Saturday morning with a magnitude of 7.9, did the maximum damage in the capital and other places, with the aftershocks adding their bit. Within minutes of the ground shaking, several building in the valley had collapsed, leading to a large number of casualties. Medical Engineer Avash K.C., like thousands of other residents in the Kathmandu, lived through the worst hours of their lives in the first couple of days. Here’s his first-hand account.

I was sitting around at my three and a half-storey home talking to seven members of my family, including my two grandparents, when the first brutal shock went through our drawing room, throwing things here and there. From the very first moment, we had no doubt that it was an earthquake, and a massive one at that. All of us ran down and out into the open, helping our grandparents along the way.

There’s an open ground next to my house in New Baneswar area which is about three km from the airport. With fear in our hearts and prayer on our lips we assembled there. I saw that the six feet high, ten metre outer compound wall of our house had collapsed, blocking the road. With tearful eyes I scanned all around our vicinity. People were running out of their houses into the open. Three other families joined us, but most people were running down the road to the International Convention Centre about 200 metres away. The centre has a large open area where many of them assembled.

Among the first things I noticed was that even concrete buildings could make a noise when swaying to the effect of an earthquake. Then the screaming started with people running in panic. Fortunately, our building held, and so did dozens of others in our neighbourhood, having been constructed in the last two decades. But the water purification tank on the ground floor of the building had burst open like an explosive.

After the initial shock had passed away, we started discussing what to do. Some of us ran inside quickly to get some bedsheets and some food material because a strong aftershock made it clear that we couldn’t go back to the building. I took out the two motorcycles and kept them in the open in case I had to take someone to the hospital by the smaller roads.

Later in the evening, I did a quick survey of the surroundings. Several hundred people were at the Convention Centre. But further away, many thousands had gathered at the Tundikhel ground. This is like Kathmandu’s Hyde Park. Surprisingly, many had been able to retrieve some kind of makeshift shelters from their homes, whether these were bedsheets, plastic coverings or flattened cardboard boxes. One enterprising group of youngsters had found a huge sheet of plastic which they made into a tent and about 60-70 people were huddled inside. A light drizzle made it imperative that people find some cover.

Everyone knew they would have to remain in the open for long, as aftershock after aftershock sent home the message that it was not safe to go back, even in the buildings that were intact. I saw several buildings that had developed cracks and a couple which had collapsed.

The night was spent out in the open with very little sleep. No sound or noise, no honking or movement of traffic. It was as if time had frozen. Except when the tremors hit.

Throughout the day we had eaten very little and preserved whatever little water we could get hold of.

Early morning, I left for my hospital on my motorcycle by an alternate route. I could see several cracks in the road and in the buildings on the way. I could also see a building or two flattened like pancakes. Army, police and other rescue workers were still trying to pull people out from the rubble.

At Kantipur hospital, I could see the service were overwhelmed by the large number of injured pouring in. It’s a 100-bed hospital, but already there were over 50 extra people there. Most injuries, I learnt from my colleagues, were orthopaedic related, in the sense that bones were broken or crushed. The staff of resident doctors and nurses had been working non-stop since the quake struck.

The senior doctors and surgeons had been called out to the much bigger government hospitals, where the number of injured being brought in was much larger. I checked, as part of my duty, that all the medical equipment were in working condition and staff present to manage them.

Later in the afternoon, I visited the government civil hospital which has over 500-bed capacity. But by afternoon, the injured were overflowing out of the building though within the perimeter of the hospital. At a glance, I could make out some 50 injured being treated out in the open. It was clear that unless reinforcement arrived, the medical services would soon be overwhelmed. The main gate of the hospital had collapsed, killing three people.

Soon, I made my way to Durbar Square, on way to another hospital, and it’s here that the full force of what had happened struck me. In this part of the old town, where several hundred old buildings jostled for space, the most common sight was mounds of bricks and wood. I did a quick count, and saw that around 60 buildings had collapsed down to rubble. A larger number of the building still standing had developed huge cracks in them and would certainly have to be razed.

There were still some buildings which remained intact, possibly where the construction material was of good quality or the buildings were comparatively new. I sat down for a minute, unable to grasp the enormity of the tragedy that had gripped my small nation. How will we ever recover? How will we ever rebuild on the memories of the hundreds who had died in the sleep or trapped under the rubble without anyone heeding to their cries? Tears were such a useless tribute to such a monumental tragedy.