Regrettably, with the US now turning the knob against Assad and Moscow doing exactly the opposite we have a confrontation within a conflict and it stands to reason that peace has been shot in the foot….writes Bikram Vohra

There is a saying that when elephants fight the grass gets trampled. Syria is already suffering from crushed blades and what is left could now be fodder for another cold war round between Russia and the United States.

Both Former Secretary of State Hillary Clinton and President Putin have chosen the same moment in time to make statements of intent that are totally at cross purposes.

Clinton is now demanding that more pressure be placed on Assad to end the strife and at least slow down the stream of refugees by forcing him into settlement with the ISIS rebels. Putin believes that any reduction of support for Assad means giving in to terror and has now gone on record as a leader who sees that as being against the UN charter of not negotiating with terrorists till the guns are silenced.

While effectively this stand-off means the conflict will bumble along leaving a sluggish trail of blood what is worse is that the two Big powers are again at loggerheads and the divide will only grow larger. The US will be doing a Contra in Syria by strengthening the firepower for the rebels and giving them a clandestine hands up all of which means the Syrian President will be driven further into the Russian fold and become that much more dependent on them.

While the refugee problem increases and will now rise again because the placement of sanctions and the slack before they take effect means that much more uncertainty. The real worrying angle is that the UN is again reduced to a lame duck and a Security Council veto a given. 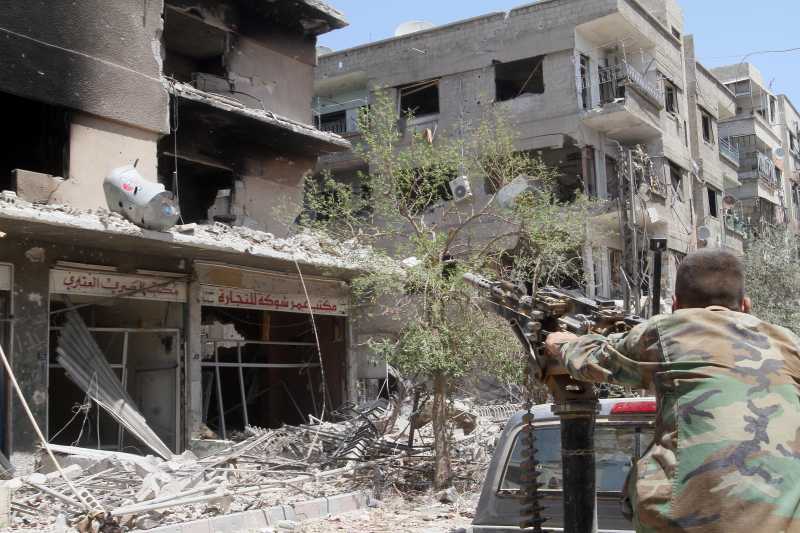 The call for peace and negotiations made by this world body has been whistling in the wind for four years and no one has sought to do it any reverence.

Regrettably, with the US now turning the knob against Assad and Moscow doing exactly the opposite we have a confrontation within a conflict and it stands to reason that peace has been shot in the foot.

The stats boggle the mind. As high as 7.5 million children have been displaced or are in need of aid. As many as 16 million have lost homes and livelihood and are penniless.

And with the prospect of peace now a bleak one these numbers will increase.

How would one feel if his country was on fire for years with no end or solution in sight? Ask a Syrian and he would tell you the only music he hears is the drum of the guns and the shrill falsetto of the missiles. This bizarre orchestra of firepower has become so much a part of the background noise that most Syrians are oblivious to it.

Yet, a whole generation is immune to the sound, their fear muted by resignation of the worst sort.

A whole generation growing up with the sight of blood as the only colour in their lives unable to do anything to stop it.

Ask any Syrian here in the Middle East and he will agree that the collateral damage is no longer just a label. It is the death of civilians who want nothing more than to go to work and make a living, bring up their families and put food on the table. How much more sacrifice can be expected of them?

Clearly, Clinton and Putin don’t seem to think on these lines.