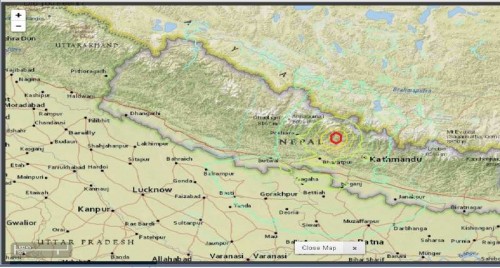 It was a morning like no other. Life in Kathmandu was proceeding slowly with people enjoying the weekend when it happened. The earth shook!

People ran out from homes, shops screaming. With the quake measuring 7.9 on the Richter scale, over 1,000 buildings, including historical structures, collapsed.

There is no electricity here. When I tried to email my story about the situation here to my office in New Delhi, I could not. The internet was down.

I called up Nepal Police only to hear chilling news. Around 200 people in Kathmandu and over 500 people across the country are presumed dead.

The streets of Kathmandu were filled with people. Thousands of them.

The Tribhuvan International Airport has been shut down and all flights have been cancelled or diverted.

Highways have been damaged with cracks developing on the roads.

As many as 15 aftershocks were felt after the first earthquake.

More than 650 people have died in the disaster in Nepal.  Major tremors were felt for nearly a minute across large swathes of Northern India including Delhi. 22 people have died in Bihar; 40 children have been injured after their school was damaged in Bengal’s Malda town. This earthquake of magnitude 7.9 was the worst to hit Nepal in 80 years.

Prime Minister Narendra Modi convened a high-level meeting in Delhi with ministers and top officials to assess the situation. After the meeting, the Prime Minister directed evacuation of tourists and immediate dispatch of relief and rescue teams to Nepal, as well as to affected areas in India. He has also appointed Union Minister Rajiv Pratap Rudy to handle the aftermath in the states bordering Nepal.
Nepal’s capital of Kathmandu has been left devastated with roads split open, and homes and iconic landmarks collapsed into rubble. There was little information coming from the outlying areas of the mountainous country and helicopters were circling overheard to get a sense of the damage. A shallow quake like this morning’s is usually more dangerous because the amount of energy released is focused over a smaller area.

At the main hospital in Kathmandu, people with broken limbs and arms were being rushed in for treatment. It was unclear how many people were injured.
The historic Dharara tower built in the 19th century in Kathmandu collapsed, trapping at least 200 people, Nepal police said. The tower had been open to visitors for the last 10 years and had a viewing balcony on its eighth floor. Witnesses spoke of dead bodies being removed from the site.