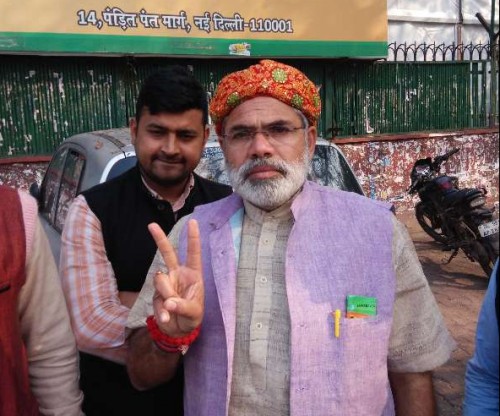 His striking resemblance to Prime Minister Narendra Modi, augmented by a close-cropped grey beard, rimless spectacles and a trademark half-sleeved kurta and Nehru jacket, leaves many Delhiites bewildered as whenever he ventures out a crowd gathers around him requesting for autographs and selfies – while some are left wondering.

Fifty-two-year-old Abhinandan Pathak, or as he likes to call himself, Nandan Modi, is a staunch ‘bhakt’ (devotee) of Modi and claims to be campaigning for him and the Bharatiya Janata Party (BJP) in all the 70 seats ahead of the Feb 7 Delhi assembly polls.

And since Modi is preoccupied with US President Barack Obama’s visit, Pathak feels his job has become more important. Obama who is on a three-day visit to India, beginning Sunday, will be the chief guest at the Republic Day parade on Jan 26.

“I see Modiji as my ‘Rama’ and I am his ‘Lakshman’ (Lord Rama’s younger brother). I have come here to support Modiji in his battle against AAP (Aam Aadmi Party) in Delhi,” Pathak, who not only speaks just like Modi but also emulates his gestures and body language, said.

“Modiji is busy with Obama and currently not able to interact with the people of Delhi. So, my job is to fill in for him,” he added.

A resident of Saharanpur in Uttar Pradesh, Pathak is a physical education teacher and claims to have cycled all the way from his hometown to Delhi – a distance of over 170 km – due to his devotion to Modi.

“I arrived here a week back and I am covering all the 70 seats in Delhi one by one on my cycle. I inform the people about the work done by Modiji as the country’s PM and 90 percent of the people that I have met agree that the BJP is the party to vote for in Delhi,” Pathak said.

Attacking the AAP’s Arvind Kejriwal who is the Bharatiya Janata Party’s main opponent in Delhi, Pathak has vowed to “expose” Kejriwal.

“He is a liar who is misleading the voters of Delhi. I will expose him,” he added.

Speaking about people’s reaction when they see him, Pathak said: “I immediately get surrounded by a crowd wherever I go. They ask for my autographs and selfies.”

Pathak, apart from being a teacher is also a politician and had founded the Manavtawadi Party in 2012, which he later merged into the BJP in 2013.

Though, he boasts of a keen understanding of politics and the electorate, it’s his uncanny resemblance to Modi that he thinks helps him in convincing the people to vote for the BJP.

“My appearance is definitely my biggest USP,” he maintained.

However, Pathak takes strong objection when someone calls him a “duplicate Modi”.

“It hurts me when someone says that I am a duplicate Modi. I would be happy if they just call me Nandan Modi as even my family calls me that,” Pathak, a father of three, said with a smile.

Pathak had campaigned for Modi ahead of the April-May 2014 general election in Varanasi, Vadodara and Delhi and this is his second visit to the national capital.

Apart from Pathak, there are at least three more Modi lookalikes – Nalin Joshi from Junagadh, Vikas Mahante from Mumbai and Jitendra Vyas from Vadodara – who have campaigned for Modi and the BJP in different elections.