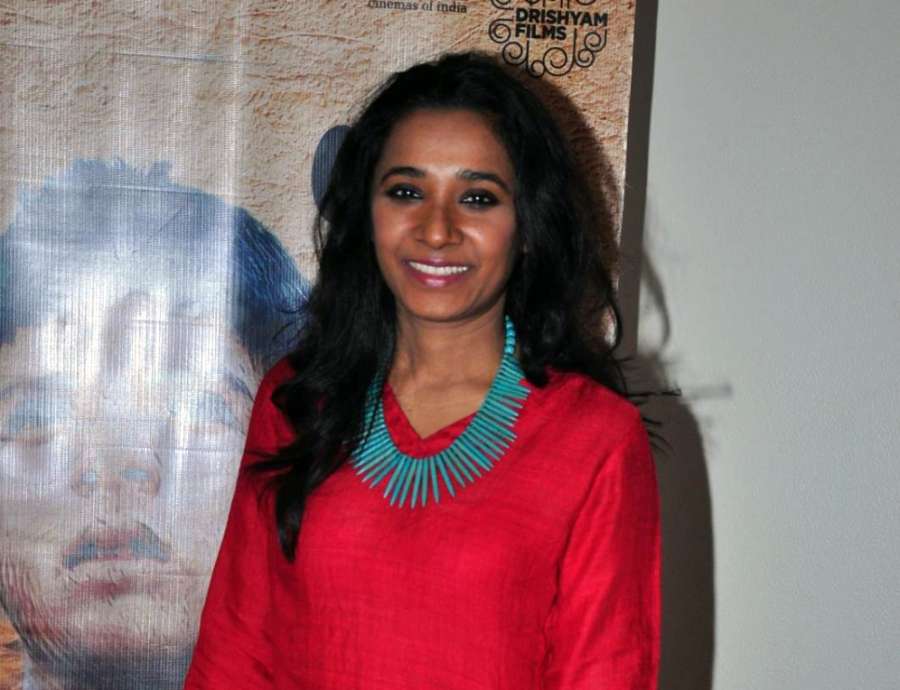 Actress Tannishtha Chatterjee, who is in news for slamming the “Comedy Night Bachao” team for accusing her of publicity-mongering with her anguish on being mocked at for her dark skin tone, says she hopes her reaction begins a movement against skin-tone racism.

Excerpts from the interview.

Q. You have caused a global furore by standing up to skin prejudice on “Comedy Night Bachao”?

It’s about time we all took a stand againt the ‘gori versus kaali’ prejudices in our society. This is not about me. And it’s not about one show. It’s about the way we think as a people. We must stop making jokes about dark skin. Period.

Q. Krushna Abhishek has accused you of doing this for publicity?

(Bursts out laughing) I went on his show for publicity only for my film ‘Parched’. I walked out after those offensive jokes. I wrote my Facebook entry on the experience where I’ve a few thousand followers. Why would I opt out of publicity on a show being watched by millions to create publicity on a medium read by thousands? Anyway I don’t want to respond to such stupid comments made by people who feel no remorse for propagating prejudices on a widely aired television show.

Q. I think Krushna Abhishek and Bharti Singh owe you an apology?

They don’t owe me an apology. They owe an apology to all those dark-skinned men and women who they have insulted. They don’t seem to understand the ramifications of their so-called jokes. It’s not about just my skin tone. Even if someone else had been similarly insulted, I would have stood up to speak against it. The channel has been gracious enough to apologise. I am glad they’ve taken a stance.

Q. What made you take this stand?

It’s a stand that I’ve taken on behalf of all dark-skinned people. Until the bias disappears, we have to keep protesting against it. I’ve been a part of the ‘Dark Is Beautuful’ campaign for the longest time. I was its brand ambassador. Artistes and art need to speak up against societal prejudice.

Q. The fair-is-lovely mindset has existed for ages. How will you change it?

I can try. I don’t want my protest against colour prejudice to die down in two days. I’ve been talking about it for years. I’ve never endorsed fairness creams. I’ve never allowed anyone to make me look ‘gora’ on screen. Our film make-up artistes are subject the fair-is-lovely mindset. And using fairness creams is unhealthy. Why propagate an unhealthy lifestyle?

Q. What do you have to say about actors like Shah Rukh Khan and Yami Gautam endorsing fairness creams?

It’s their choice. They have to do what they want. I’ve done what I wanted. Ajay Devgn has spoken up for us. We need more stars to come forward to support me.

Q. In our films like ‘Gora Aur Kala’, Gora was the hero Kala was the villain.

Exactly. I was sharing this with Nandita Das. When we play a village character, our (dark) skin tone is fine. But when we play an urban character or upper middle-class educated character, we are supposed to get fairer. When the make-up person comes forward with his argument for why a city character must be ‘gori’, I have a long chat with him.

Q. Have you ever given in to the demand to look light-skinned on screen?

Never! In fact, when I did ‘UnIndian’, some critics commented on why such a dark girl was cast as a savvy working-woman in Australia. Someone wrote they should’ve cast someone pretty. Pretty is equivalent to fair skinned. This prejudice is all-prevalent in our country. Look at how Africans are treated in our country.

Exactly. This prejudice has to change. 90 per cent of us Indians are dark skinned. There are other body biases in our society. But skin prejudice hits at a person’s self-esteem. It is rooted to the caste system. That is why I salute Nagraj Manjule for casting a fair-skinned boy as a Dalit in ‘Sairat’. We need more films to break stereotypes.

Q. On Arnab Goswami’s news show, roasters were seen telling you to come on their show to be properly roasted?

I think Arnab gave them a befitting reply. I am overwhelmed by the support I’ve received from the film industry. People like Ajay Devgn, Nandita Das, Dia Mirza, Zoya Akhtar and Hansal Mehta have spoken up to support my cause. We’ll continue our fight. I know there will be lots of resistance and retaliation. But I am ready for it. We all have to workA towards changing this mindset.

Even western mythology propagated that good is white and bad is black. It’s changed in the west. It’s got to change here also. You can’t propagate prejudices on national television. Comedians need to re-educate themselves on the definition of humour. They are saying roasts are like this in the US. It’s a colonial hangover… Make fun of the prejudice. Don’t make a joke of a person who is a victim of the prejudice.

Q. Do you have a solution?

I think schools should have classes for colour conditioning. Children need to be educated on why dark and fair skin are equally beautiful.Children musn’t tease each other by using kaali as an abuse.Even parents need re-conditioning in their mindset. Please don’t splash talcum powder on your daughters’ faces before sending them to school.

Q. Should shows like “Comedy Nights Bachao” be banned?

No. I am not in favour of bans and censorship. We have to make a noise about prejudices. And the comedians need to get their act together. Asking me if I ate a lot jamun to get skin like that is wrong on many levels. Jamun is very good for the health.