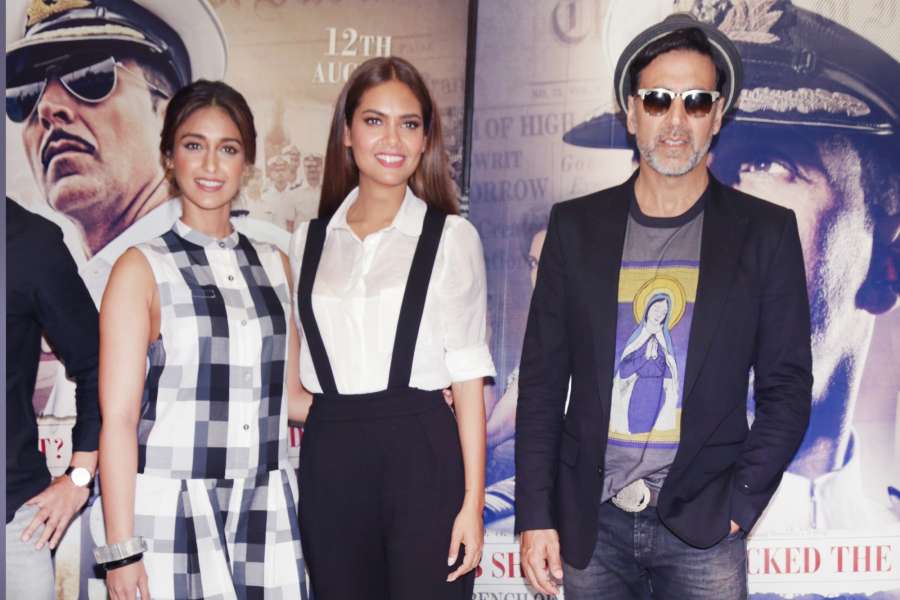 A picture-perfect Naval officer, highly decorated, principled, patriotic and deeply in love with his wife, comes ashore quicker than expected and catches his wife cheating with his best friend.

Since the husband is played by the remarkably evolved Akshay Kumar, we are mercifully spared the hysterical aftermath of an inherently melodramatic crime of passion that shook and stirred Mumbai’s beau monde in the year 1959.

That was the celebrated K.M. Nanavati case, known to change the way we look at the laws regarding crimes of passion.

“Rustom” plucks the core of the crime, unplugs the theme of infidelity from its original context and plays deviously around with the facts to create a semi-fiction ‘what-if’ scenario where the characters hurl towards what the film’s writers would like to think of as an unexpectedly shocking ending.

It’s like watching a true-life crime story from Shyam Benegal, done in Walt Disney studios. The passion and drama feels real, thanks to a solid sincere central performance. But the manner in which the story unfolds suggests that no harm can come to this world of fragile, blemished but unbreakable Utopia.

The director, who last visited London in the year 1920 in London 1920, takes to Mumbai in 1959 with a ferocious fulsomeness. There is a cardboard voluptuousness about the sets, including the courtroom where most of the drama in the second-half unfolds.

The accents are exaggerated and excitable, and the make-up is lush, accented ripe and crimson, as though to highlight the theme’s deep-rooted affinity to Alfred Hitchcock and Brian de Palma’s film noire .

Desai tackles the tender and powerful moments in the plot with all the skill at his disposal. Many of the potentially powerful moments suffer from the want of respite. The pace is breathy and anxious.

The idea is to grab the restless audiences’ attention without inundating them in periodicity. The plot is therefore pulled forward with an urgent tug where we are led to believe that there is more to this crime against infidelity than meets the eye.

By the time the shock end bounces into the stylised courtroom (more akin to B.R. Chopra’s “Kanoon” than Subhash Kapoor’s “Jolly LLB”), we are not left with much room to absorb the enormity of the ‘revelation’

The makers of “Rustom” were right. This is not the Nanavati case that shook Mumbai in 1959. The 1963 film “Yeh Raaste Hain Pyaar Ke” was much closer in spirit to the real crime. And the bewitching Leela Naidu as the unfaithful wife…ummm… killed it.

Ileana D’Cruz as the wife is distressfully apologetic and sniveling. Why must her infidelity be seen as an accidental slip and why she be the hand-wringing lip-biting penitent wife who worships her husband for being such a pillar of strength during times of marital adversity?

If only the script had the guts to say that what we all know — that women with absentee husbands do stray from the marital fold — this film could have been a powerful voice for a spouseless wife’s sexual needs the way Aruna Raje’s “Rihaee” was so many years ago.

Instead in “Rustom”, Ileana is shrill and repentant like Reena Roy in “Bezubaan” after photographer Naseeruddin Shah seduced and blackmailed her.

It is all the randy philanderer Arjan Bajwa’s fault, you see. Why oh why did he seduce the wife?

Some of the supporting roles such Bajwa’s philanderer, Esha Gupta as his vengeful sister, Pavan Malhotra as the investigating police officer and Kumud Mishra as Russy Karanjia-modelled tabloid editor, throw forward interesting possibilities but remain shadowy figures meant to contour the heroic dimensions of the main protagonist.

“Rustom” is unmistakably a vehicle to showcase Akshay Kumar’s power to portray spiritual transparency during times of stressful betrayal and deception. He does so with a sincerity that is at times heartbreaking and at other times reassuring.

After “Airlift”, this is one more performance from Akshay that proves he can hold the camera without making overt attempts to get our attention.

Most of the second-half of “Rustom” is a courtroom drama with Akshay fighting his own case. Indicative of the film’s battle ahead.