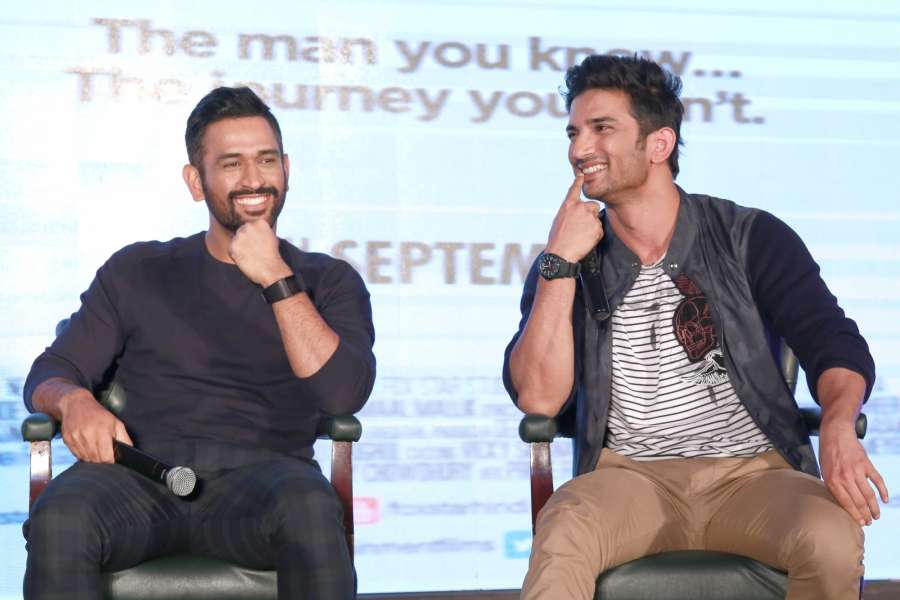 “MS Dhoni: The Untold Story” has been an enriching experience for Sushant Singh Rajput. The actor, who always wanted to be a cricketer and has portrayed the star player in the forthcoming Bollywood biopic, says he has not just improved his game but has also learnt from Dhoni to be a better listener.

Q. How well do you know Mahendra Singh Dhoni after playing him?

You mean after playing like him? I knew him fairly well before the film. While making ‘MS Dhoni: The Untold Story’, I got a chance to observe him closely. Once he agreed to the biopic, he was very honest and patient, answering all the questions that I’d ask. He remained equally involved throughout the project and now while promoting the film. But if you ask me how well I know him beyond the film, I have to say, very little.

Because he doesn’t carry a phone. Seriously! I kid you not. Of course, he has people taking care of all his communication work. But he doesn’t personally carry a phone. And he doesn’t socialise either. In all the time that we worked over the film, I only remember meeting up once socially with him. It was in Kolkata right after the first teaser trailer of the film.

Q. You’ve been promoting the movie with a vengeance. Are you enjoying the process?

Yes, specially when I am with the real Dhoni. We recently visited the great Rajinikanthji. I was simply bowled over by his humility. So yeah, it’s enjoyable, except when sections of the media don’t get my point.

Q. What do you mean?

I take great pains to explain how important this film is for me, and why. And what do I see? Headlines about my relationship status.

Q. So why answer personal questions?

Q. The film is looking every bit as exciting as the man’s life and career?

I hope so. I’ve given all of myself to the film.

Q. How different is it playing a real-life character from playing fictional characters?

You’ve to work a lot harder when the real-life character is with us, and very active publicly. The audience has a ready reference point and will be scrutinizing you for errors in projecting him. With a fictional character like ‘Byomkesh Bakshy’, I had a lot more room to improvise and move around.

Q. Was that easier to do?

Q. So you don’t disown your failure?

Never! When I look back, I feel the same amount of satisfaction for both ‘Byomkesh…’ and ‘Dhoni’. I don’t get affected by box-office numbers. I might when I turn producer.

Q. Do you intend to turn producer?

Why not? If I see a good story and I see no buyers, I might as well do it myself. Because there are stories that I must tell.

Q. I believe there was a cricketer closeted in you from before you played Dhoni?

I wanted to be a cricketer. But I was not skilled enough to be a national level cricketer. Now after the film, I play better cricket. I didn’t want to look like I was just faking the moves in the field. I had to convince myself that I was this guy who I had watched and admired for 15 years. It was quite a journey.

Q. So how did the journey begin?

Even before the script was ready I was looking at Dhoni’s videos, over and over again.The intent was to understand the way he thought moved and behaved. I had to get my posture and thought process in place before we started shooting.

I couldn’t think about these things once the camera was switched on. For 12 months I trained on the field to feel like a professional cricketer. After 4-5 months the analyst came on board and we began working on the specific shots on the field. By the end of it, I was playing like Dhoni.

I wanted to play like him. But I didn’t want to imitate him. I didn’t want to consciously pick up those nuances in Dhoni’s personality that people immediately identify with him. I wanted my performance to grow organically.

Q. I think getting the mind right was more important?

True. To understand the way he was, was far more crucial. I’ve been following his cricket and also his quick wit and swift comebacks. But to me, the more important question was, ‘Why was he the way he was? What made him so iconic?’ I’d try to figure it out by meeting Dhoni as frequently as possible.

Q. How often did you meet him?

There were three sets of meetings. During my first meeting, I asked him to just talk about himself as I listened. In the second meeting, I was asking him the questions and he was answering, including multiple-choice answers. Then lastly in the third meeting I had with him just before the shooting started, I asked him questions from the script. I made sure I was Dhoni before I started shooting.

Q. So are your personalities inter-changeable?

I’d like to think so. We agree on one basic issue of life. We both believe the past is in the past and that we should only focus on the present. When you meet him, he is actually listening and talking. These days we don’t listen to what people have to say. I have learnt the value of listening from him.

Q. How therapeutic was doing this film for you after the breakup with your girlfriend?

It is the same as it was before. I am so much into my work that I don’t take myself seriously. You know, when I was in school, I was allowed to play from 4 p.m. to 5.30 p.m. During that period, I could play any game. The entire day I’d wait for my play time. Now, I don’t have to wait for my play time.I’m living those one and a half hours 24 hours a day now.