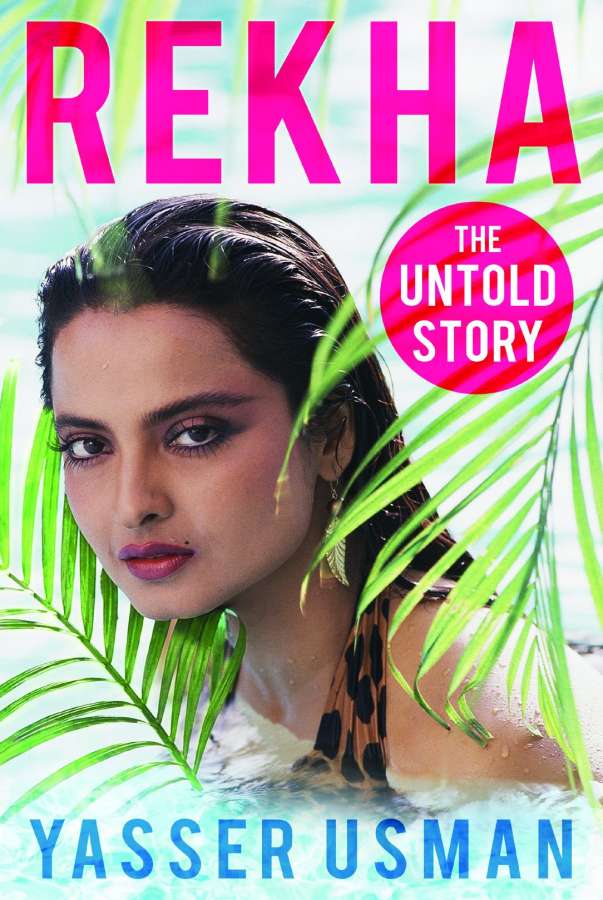 Film stars are expected to shock with their apparel and appearances, but not with socio-religious customs. Yet she began applying sindoor – the traditional symbol of a married Hindu woman – even a decade before her one acknowledged marriage and at an official award ceremony, even President Neelam Sanjiva Reddy couldn’t keep from asking her why. It was fashionable in her home city, replied Rekha.

That was Rekha – always seeking to live and work on her own terms, right from her career’s start in a staid, conventional era. But as this biography tells us, the journey of a rather pudgy and dark-complexioned Bhanurekha Ganesan, who even didn’t know Hindi, to becoming a stylish, seemingly ageless diva who entranced Hindi movie fans over four decades, was far from smooth, or even assured.

“Millenials think of her as retiring and distant. But how did she get there? Who is the real Rekha? Is she the mysterious and elusive woman of the years after her doomed marriage? Or the carefree and loudmouthed teenager who never shied away from speaking her mind? Is she the product of her association with Amitabh Bachchan? Is there more to the story of Bollywood’s ‘eternal other woman’?”

These are the questions that Yasser Usman, in the second of his planned biographical trilogy on Indian superstars (after beginning with late Rajesh Khanna), seeks answers to as he takes us through her roller-coaster life.

As he brings out, it entailed for her a childhood overshadowed by the absence of a father – and cut short by the need to support her family by plunging into films, where her first few forays were less than a pleasant experience. Then there were gibes aplenty on her ‘otherness’ (which perhaps explains her penchant for playing the other woman, or a courtesan, in some of her most renowned roles), a reputation for unreliability, a string of failed romances and so on.

Even when she transformed into a more polished and professional performer, there was her figuring in Bollywood’s biggest item of gossip, and finally, her less than happy marriage which ended in a tragedy, all of which Usman deals with even-handedly, to her triumphant return to become an abiding legend.

Usman, who confesses he was never a big fan of Rekha since she was far from her peak when he grew up, constructs his account through conversations with those who have worked with her, and plumbing through all her old interviews as well as quite a few relating to her. His attempt to interview Rekha personally didn’t fructify despite a “nice chat” with her secretary Farzana, who heard him out patiently and promised to get back – but never did.

It is not the first biography (Usman cites one 1999 work) and most of the material comes from already published/telecast sources and would be familiar to anyone who has been following Rekha, but the author not only collates it into a seamless whole but manages to break some new ground by seeking views of those behind some of her finest performances – Gulzar (“Khoobsurat”, “Ghar” and “Ijazat”), Shyam Benegal (“Kalyug”) and Muzaffar Ali (“Umrao Jaan”).

Beginning with the circumstances and consequences of her short-lived marriage with Mukesh Agarwal (where he also manages to get some insights from former Delhi Police Commissioner Neeraj Kumar, who had dealt with the case then), he then goes back to her uneasy childhood and then follows a linear approach.

Apart from the expected chapters on Amitabh Bachchan and “Silsila”, one telling one is her brusque treatment of Puneet Issar, who had nearly ended Amitabh’s career in 1982.

But one place where what Usman could have done more was give us some more information, like co-stars and plots, of her films, including 25 in 1977 and 1978, rather than just listing the names and asking if any “rings a bell”.

On the other hand, there is also an insightful comparison with an iconic foreign actress (not Greta Garbo), while overall, Usman brings out the sad cost of movie stardom, especially for women, who are expected to be larger-than-life, engage in all kinds of exploits and controversies (which we relish reading about) but judged harshly for all this when they seek a normal life – and fail.