‘Enter a world were things are not always as they seem’

These were the welcoming words at the beginning of this national museum. The museum has indeed taken to a world that is unknown to many. If one has not been into a ship before, entering the museum will give you a glimpse of how the interior of the ship is. 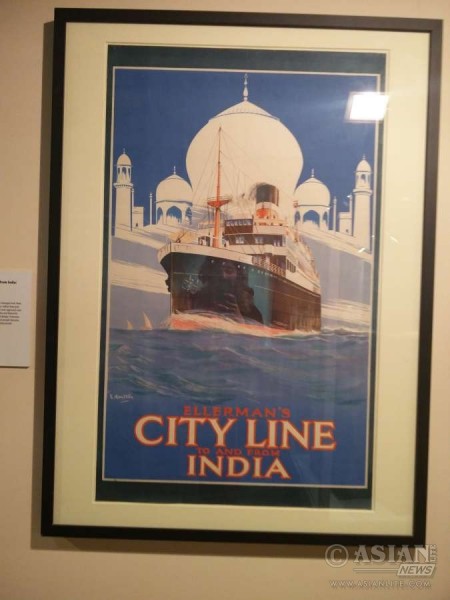 The museum greets us with a collection of posters dating from 1888 to 1980. This exhibit area titled as the ‘Sail Away’ has 14 posters which advertised the Liverpool shipping companies. Among the 14 posters, the one which captured my attention is the poster with the Taj Mahal background. This poster which is  titled  as ‘Ellerman’s City Line to and from India’ was designed in 1920’s.

This poster is a clear indication of the changing aspirations and needs of the passengers over time. More people had time and money to tour. Sketching exotic locations was a new method of that time to attract more people to explore overseas scenes.

Marking the 300th anniversary of Liverpool’s Old Dock, ‘On the Waterfront’ exhibit area  covers the period from the 18th century up to the present day. Personal stories of the waterfront workers show how the waterfront has changed and the impact it has had on the city and the lives of local people.

In addition to stunning photographs of waterfront workers and buildings throughout Liverpool’s history the first known painting of Liverpool,the itinerary for Prince Albert’s visit to the city to christen the Albert Dock,a register of vessels showing the first ship using the new Albert Dock in 1846, and huge dock scales used to weigh cargo are also exhibited.

The waterfront has changed greatly in appearance and use since the construction of the Old Dock, but it remains an important symbol and focal point of the city.

‘Titanic and Liverpool: the untold story’ is a compelling exhibition that explores Liverpool’s central role in the Titanic story. Titanic was built by the Whites Stars Line when Liverpool was at the height of its prosperity. Therefore, the Liverpool people had strong links with Titanic as officers, crew, passengers. The Museum area that plunges into the untold story behind titanic and Liverpool gives us a glimpse of the materials and fittings used for the construction of the titanic.

The builders model of the Titanic is another highlight of the muesuem. After the titanic disaster, the model was altered to represent Bitannic, the third ship of the class , which sunk while serving as a hospital ship during the First World War.

This major exhibition titled as ‘Lusitania: life, loss, legacy’ was opened 100 years after the sinking of the Lusitania. Highlighting new research about the people involved in the Lusitania story,the display also considers the role of Liverpool’s liners in the First World War.

Life at sea is very different to life on land. This gallery also looks at life on board for seafarers and passengers. Discover how sea travel has changed, from the luxury of the 20th century liners, to the long, dangerous journeys of 300 years earlier, and today’s huge container ships

The Maritime Museum galleries reveal some of the unique seizures used for criminal activity. How wooden carvings were used to conceal 21kg of cocaine, how the trade in endangered birds crosses Europe to conclude in a small farm in North Yorkshire can be discovered here.  The  objects displayed also tell stories of how officers did their job.

After enjoying this Maritime journey, these lines from the movie Titanic were ringing in my head:

Near, far, wherever you are
I believe that the heart does go on
Once more you open the door
And you’re here in my heart
And my heart will go on and on

Yes, the visit to the Merseyside Maritime Museum will stay in my heart.