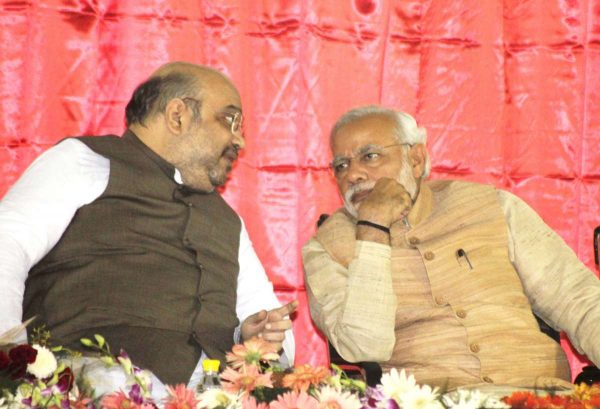 With eye on next year’s assembly polls in five states, including Uttar Pradesh, and on “Mission 2019”, Prime Minister Narendra Modi exhorted BJP party workers to preserve the massive goodwill the party received in 2014 till the next general elections. Bharatiya Janata Party (BJP) chief Amit Shah, in his speech, trained his guns at the state’s Samajwadi Party government and raised the issue of alleged “migration” of Hindus from Kairana, in Shamli district, and the recent Mathura violence.

The Prime Minister, addressing a meeting of party office bearers in Allahabad before the official inauguration of the party’s two-day National Executive meet, said: “The need of the hour is to preserve the massive goodwill that the party got in 2014, like a monsoon downpour,” according to a BJP leader, who attended the office bearers meet.

The Prime Minister also asked the party leaders to preserve its 11 crore members.

Reminding party leaders of “Mission UP” and the 2019 Lok Sabha polls, Modi said the party needs to preserve these 11 crore people as “voters and members” of the party by involving them with social initiatives and campaigns of the BJP government.

Modi also gave tips to party leaders to change in accordance with technology, time and age, keeping in mind the assembly elections in Uttar Pradesh, Uttarakhand, Punjab, Gujarat and Himachal Pradesh which are due next year.

However, Amit Shah targetted the Samajwadi Party and the Congress in his speech.

He attacked the SP government over the “atmosphere of violence” in Uttar Pradesh.

“There is no peace. Here, the atmosphere is of violence and the state government has failed to control all these,” the Bharatiya Janata Party president said.

Shah also directed his ire against the Congress, saying its politics of obstructionism had become the hallmark of the main opposition party in the last two years.

This is also the reason for the weakening of the Congress, Shah maintained.

Providing to the media highlights of the party president’s address, Union Minister Ravi Shankar Prasad later said that Shah compared the performance of the previous United Progressive Alliance (UPA) government at the Centre with that of the BJP-led National Democratic Alliance.

“While there was policy paralysis in the Congress-led government, our government has made progress with clear policy decisions — where policy decisions are taken by the political leadership and the executive implements them,” Prasad quoted Shah as saying.

“The previous government was marred by policy paralysis. Our government has been a decisive government that has ended a lot of dilemmas of the previous regime,” he said.

The BJP president pointed out that the two years of the Modi government have been corruption-free.

He also asserted that the NDA government’s two years have been exceptionally good and a lot has been achieved.

“This year, two important things have happened. First, our government, led by Narendra Modi, at the Centre has completed two years. And second, the performance of the Bharatiya Janata Party has been very good in the state assembly elections,” he said.A

Referring to the recent polls, Shah said: “The victory in Assam has opened the gates to north-east India for the BJP.”

“From Kashmir to Kanyakumari and from Kutch to Guwahati, the BJP is expanding,” he said at the meeting, which was attended, among others, by senior ministers, BJP chief ministers, party MPs and state unit chiefs.

He said: “The Congress-led UPA government was in a dilemma whether rural development should take precedence over urban development. Whether there should be reforms or social welfare?”

“Our government has overcome all such dilemmas by striking a fine balance between rural and urban development, reforms and social welfare and issues of governance,” Prasad quoted Shah.

The party chief also said that unlike in the past the “disconnect between the foreign and defence policy” has also been done away with in the last two years.

He also expressed confidence that the party will return to power in Uttar Pradesh in 2017 and the Centre in 2019 as well.

Shah referred to the top civilian honours accorded to Modi by two prominent Islamic countries, Saudi Arabia and Afghanistan, in a clear message to Muslims who continue to be wary of BJP due to its Hindutva agenda.