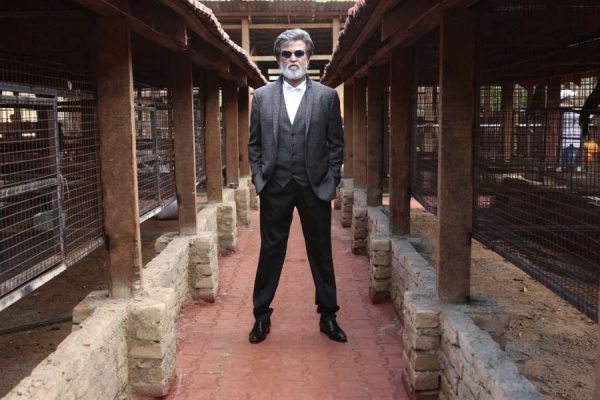 Rajinikanth’s presence in the long-awaited “Kabali” is like the Second Coming. He is no less than God for his fans. And since his last two films under-performed the Rajni -devotees are determined to see this one swish past all skeptical readings of a career that scoffs at all attempts a rational understanding.

So does he, or doesn’t he in “Kabali”? That’s the question. The answer is clearly blowing in the wind as the mega-star, the Thalaiva huffs and puffs and mows down all opposition to his overpowering altruism. He is larger-than-life-and his introductory sequence is a thesis on screen-heroism-and yet determined to be in-sync with a more real persona than he routinely plays.

The big bulky sprawling canvas of the film moves schizophrenically from neo-realistic real-space situations (the plight of Tamilians in Malaysia) to classic Rajni-flamboyance.

Director Pa Ranjith who earlier made the offbeat raw and real Madras, seems unsure as to how he should bring Rajinikanth’s iconic image into the raw-and-real space. How does a filmmaker cut down the excess bravura of a rabble-rousing entertainer without undermining his image?

Unsure of how Rajni’s fans would react to a completely made-over mega-star, director Ranjith finds a middle ground of narration. “Kabali” is sometimes gritty, often times giddy. The narration is simultaneously realistic and over-the-top. The messianic image of the mega-star is used here to tap into the actor in Rajnikanth.

Like Salman Khan in “Bajrangi Bhaijaan” and “Sultan”, we see Rajinikanth in “Kabali” playing a character, rather than a variation of himself. It’s a welcome change from the norm. A lot of what we see Rajini do in this film echoes Amitabh Bachchan’s “Mahaan”. The get-up and most specially the scenes with his screen wife, played by Waheeda Rehman in “Mahaan”, and…errr…Radhika Apte in “Kabali”, are similar.

Hard as she tries to create a credible space for herself Radhika is unconvincing as Kabaleeswaran’s long-lost wife. Her flashback portions are a dramatic pause this breathlessly paced actioner could have done without.Some of the other supporting actors specially Rithvika and Dhansika do much better.

But make no mistake. “Kabali” is a Rajinikanth vehicle fuelled by his indomitable image as the man of the masses. Dressed in dapper threads striding arrogantly in his cool new avatar Rajinikanth is a scene-chewing killer.

From the moment he enters the plot, he takes over the proceedings like an orchestra conductor, making everyone else seem hopelessly redundant.

Here he alternates between crowdpulling gimmicks and a more subdued avatar. The mix is exciting if somewhat unsettling for his diehard devotees. It’s like your God’s halo has suddenly changed its position.

The music by Santhosh Narayan serves not as a speedbreaker but to enhance and heighten the progressive dramatic structure of the well-executed but somewhat hackneyed plot.G Murali’s camera is not compulsively obsessed with its hero. The frames allow other actors to make their presence felt. Hence this Rajni film has more breathing space than ,say “Lingaa” where the director seemed too awed by the superstar to let him out of sight for even a moment.

There is no monster manoeuvre to grab attention here. Kabali is Rajnikanth’s most thoughtful and sensible work in a long time. For those how came away from his last two films feeling cheated and betrayed “Kabali” is ample compensation, and then some more.

But be warned. The over-gimmicky stylized Rajinikanth is now a thing of the past. The Thalaiva has matured. And so should his fans.

So the verdict. Does Rajinikant rock it in “Kabali”? Yes! Though the motions of his iconization have now altered somewhat.