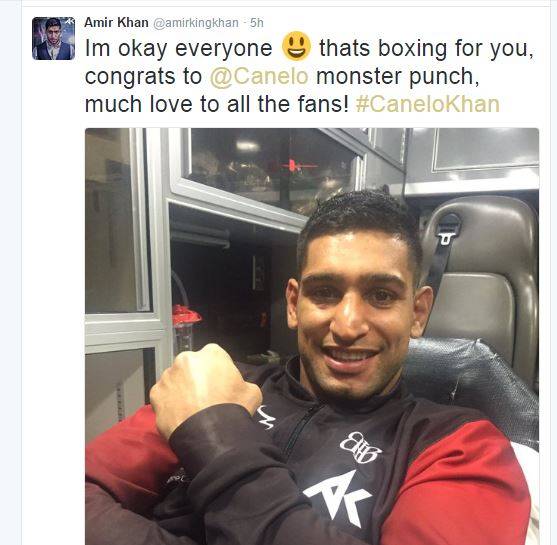 But the Bolton-Bolt used his superior speed and movement to frustrate the champion and appeared to be well ahead on points. However, when Khan lost concentration for a split second the champion knocked him cold with a huge right hand. But he is £9 million richer after the fight.

“I wanted to go out there as a champion, but unfortunately I didn’t make it to the end,” he said. “This challenge came and it was hard to turn down.”

The 29-year-old of Pakistani origin was  billed as the underdog against his more illustrious rival, but is confident that he will be hailed as the new king of the sport with Floyd Mayweather Jnr retired.
Before the fight, the 2004 Olympics silver medallist said: “If I win this fight I really believe I will be the next big superstar in boxing. This won’t even be the pinnacle, there is still a lot more to do.”

“Every fight is massive, but if I win and have another fight here, it will be even bigger,” he added.

Khan will receive a whopping nine million pounds for the clash at the T-Mobile Arena. It will be the highest amount paid to a challenger since David Haye took 10 million pounds for fighting then world champion Wladimir Klitschko in the heavyweight unification fight for the WBA (Super), WBO, IBF and IBO titles in 2011.

“I’ve tasted defeat and I’ve won some fights, but I know now what mistakes I made. I don’t think I will ever make those mistakes again,” he said.

Prior to the fight, Khan’s camp had to agree to several demands from Alvarez’s team including a higher catch-weight and a rematch clause if he wins.

“Everything is on their side. I wanted the weight to be a little bit lower and wanted a next-day rehydration clause, but they said no,” Khan asserted.

“When I beat him, he’ll have no excuses because I beat him at his own game.”