Here’s one for Smriti Irani: She didn’t deserve to be cut to size….writes Bikram Vohra 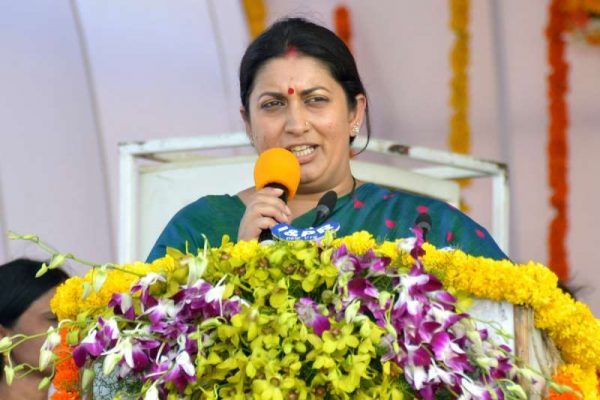 I like Smriti Irani. So there. I like her spunk and the colour she brought to an otherwise drab Cabinet and the fact that she had her own drum and walked to its beat.

She did it her way and it is terribly uncharitable to knock her when her own boss has just clipped her wings.

How about this theory? She was getting more limelight than just a slice of lemon and the Modi kitchen cabinet wasn’t liking that so they made a whisky sour out of it and painted her up to an obedient media as a nuisance and an embarrassment. The media swallowed the bait, found it fun to give her a hard time and minor infringements became nails in a career coffin.

Get Carter changed to Get Smriti because she was a worthy target.

Weren’t we just a little too harsh on her at a time when there are more men and women with bulbous red noses in government than we would find at the Gemini circus?

Why did we go for her? Because we loathed her independence and her arrogance and she did not pander to the fourth estate or plough its furrows to our liking?

Let’s be honest. She never really stepped out of line and was a loyalist. She said it as she saw it and she walked tall.

She did not brown nose, suck up or go corrupt. What was so wrong for her — in a flaccid, placid BJP government that is pretty much like the cologne, A One Man Show – to perform in Parliament in February and give rhetoric, however shrill, at least a look in? How many BJP speakers have you heard with such attention since then? Sure she bellowed and yelped and went all dramatic but is that such a crime when people fight and throw shoes in the same House?

Every government needs a character. She was that person. By sidelining her we have lost a Quixotic crusader and the windmills are desolate. Who will tilt against them? Least of all the newcomer Prakash Javadekar whose mildness of nature is equivalent to playing tennis without a net.

I remember rooting for her during that speech and it never ceases to amaze one that it is so easy to hate people who do not conform. Masscom, in its monstrous form, conspires then to go for that individual and turn him or her into a cartoon.
Walk with me through these huge controversies and ask yourselves if they were so worthy of demotion.

Over the JNU issue she took a stance and stayed with it even arguing the accusations that she made rude references to Goddess Durga.

The hooha over dropping or keeping German from the syllabus in Kendriya Vidyalayas wasn’t even a whistle in the wind and if Angela Merkel didn’t like it, hard cheese.

Caught in an exaggeration over her own qualifications was admittedly awkward but in a Parliament where higher education would still be as rare as a four leaf clover, big deal. She was, at worst, following her boss, right so okay, one black point.

Then there was that stir over the appointment of IIT directors. So what? Every ministry has a pro- and anti- faction to every appointment or change in procedures. You would think Smriti was cleaving a fresh path. Look at the shabby departure of RBI Governor Raghuram Rajan, isn’t that bigger than a bunch of professors?

Put all these teeny weeny, itsy bitsy indiscretions together and over two years do you really think that she deserved to be cut to size?

Whatever that size is.

What else has gone wrong with Human Resources when we have Defence Ministers who tell our soldiers not to die and we have Culture Minister Mahesh Sharma catapulting such gems of wisdom as ‘Girls going out at night is not Indian culture’ and ‘Only a source of inspiration can be inspirational. Aurangzeb Road has been named after such a great man who, despite being a Muslim, was a nationalist and a humanist, APJ Abdul Kalam.’ Tchah.

I could go on in this list of foolish statements in high places making Smriti’s comments come off like vanilla ice cream.
Come on, be fair. There was always a little envy in the way we packaged her. And the media was nasty because she was a fun target.

Won’t say goodbye girl, have a feeling you’ll be back.