Bosnian Serb leader Karadzic, the mastermind of everal massacres in Bosnia, gets 40 years in jail 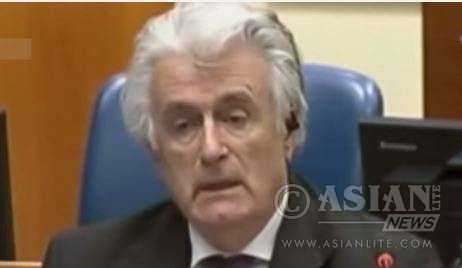 Former Bosnian Serb leader Radovan Karadzic was on Thursday convicted and sentenced to 40 years imprisonment by the International Criminal Tribunal for the former Yugoslavia (ICTY) in The Hague.

According to Xinhua, the former president of the Republika Srpska was acquitted of the first count of genocide in several Bosnian municipalities, which was not a surprise, because in the ICTY no suspect has been convicted for this charge.

“There was not sufficient evidence for genocide without reasonable doubt in the municipalities,” the judge said.

Karadzic was found guilty for the genocide in Srebrenica.

“He was receiving information through various channels and was the sole person who could have prevented the Bosnian men from being killed,” the judge said.

Karadzic was found guilty of five counts of crimes against humanity (persecutions, extermination, murder, deportation, inhumane acts) and four counts of violations of the laws or customs of war (murder, terror, unlawful attacks on civilians, taking of hostages).

“Good afternoon,” the 70-year-old Karadzic, dressed in a dark blue suit with a light blue striped tie, said after entering the courtroom in The Hague.

Listening to the words of presiding judge O-Gon Kwon, who took almost two hours to read out his judgment, Karadzic sometimes raised his eyebrows, gave a look of disbelief or shook his head.

The former supreme commander of the Bosnian Serb armed forces and president of the Republika Srpska was held responsible for the deaths of thousands, including the lost lives during the Siege of Sarajevo between April 1992 and November 1995 and the massacre in Srebrenica in July 1995, in which over 7,000 Muslim men were reportedly killed by Bosnian Serb forces.