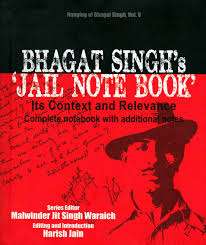 In prison, as he awaited execution, Bhagat Singh the revolutionary spent a lot of his time reading. And he took copious notes from the numerous books he read and wrote them in a notebook. This book is a fascinating analysis of Bhagat Singh the political thinker, based on his Jail Note Book that he kept between September 12, 1929, and September 16, 1930.

Bhagat Singh was a voracious reader. And so were most others in the revolutionary movement. Each time police raided their hideouts, books used to be seized in large numbers. Bhagat Singh’s interest included both politics and non-political subjects. His favourite authors were Bernard Shaw, Bertrand Russell, Charles Dickens, Dostoyevsky, Jack London, Jean Jacques Rousseau, Marx, Engels, Lala Lajpat Rai, Leon Trotsky, Omar Khayyam, Ramananda Chatterjee, Veer Savarkar and Lenin. A total of 100 authors are represented in the Jail Note Book.

The Note Book (bought from Bharati Bhavan, Booksellers and Publishers, Lahore) consists of 404 pages, out of which Bhagat Singh had filled up 140 when he decided to hand it over to his family for safekeeping once he was moved to the condemned cells. It was filled with notes on a wide variety of disparate subjects: capitalism, socialism, origin of the State, communism, religion, sociology, facts about India, French revolution, Marxism, forms of government, family and marriage, internationalism, poverty, crime, justice, punishment, imprisonment, prison, criminology and legal jurisprudence – a clear indication of how well read and well informed the young Bhagat Singh was, in sharp contrast to the “gun crazy terrorist” the British portrayed him to be. 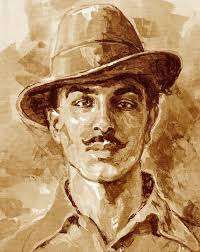 According to Editor Harish Jain, Bhagat Singh wrote to his friend Jaidev requesting him to send some books from the Dwarka Dass Library and the Punjab Public Library. Interestingly, he mentioned the classification and cataloguing number of eight books. Library classification and numbers are not something one quotes from memory. It meant that Bhagat Singh was getting the list of books available with the libraries with their classification numbers to make it easier for him to ask what he wanted.

From his jottings, it is clear Bhagat Singh did not read all the books that came to him cover to cover. But some he read thoroughly, including Trotsky’s “Lessons of October 1917”, “Marx to Lenin” by Morris Hilquit (an American socialist) as well as “Hindu Pad Padshahi” by Veer Savarkar. Harish Jain insists that it was Russell’s writings which influenced Bhagat Singh’s classic “Why I am an Atheist.”

Just why he quoted some authors at length and some briefly will remain a mystery. Bhagat Singh’s Jail Note Book also has poems. It is a window to what the young charismatic revolutionary was. Shockingly, the Note Book did not become public knowledge until 1994 – a gap of 64 long years – though a Russian scholar, L.V. Mitrokhin, reported its presence way back in 1981 while researching on Russia’s links with Indian revolutionaries. Jain says “it was inappropriate judgment on the part of those who were the keepers of this ‘national treasure’ to have kept it in darkness for so long.” 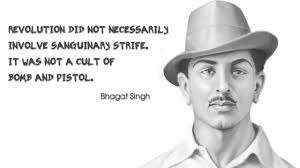 There have been other editions of the Jail Note Book. Where Jain’s score is the sheer scale of research that has gone into tracing the original editions of the books Bhagat Singh quoted from. This edition also has 12 foolscap sheets of miscellaneous pages that Bhagat Singh maintained and which Jain says is appearing for the first time.

Whatever Bhagat Singh wrote in his lifetime was addressed to people at large and meant to be propaganda against the British colonial rule. But the Jail Note Book was addressed to himself and did not contain any of his own writings. “Through the words of the Note Book he shares his vision of a better world resonating in his mind with his deep thinking, sustained reading and a continuing dialogue with his imminent world. The model he creates of an inclusive and just world is something most suitable for the present times.”

With Bhagat Singh’s handwriting spread over 140 pages, this book is a steal at Rs 495. Every Indian must own a copy. It is indeed a national treasure.