Tarun Basu reviews Perilous Interventions by Hardeep Singh Puri. Basu focus on the blunders of interventions and the policies the world is now paying for 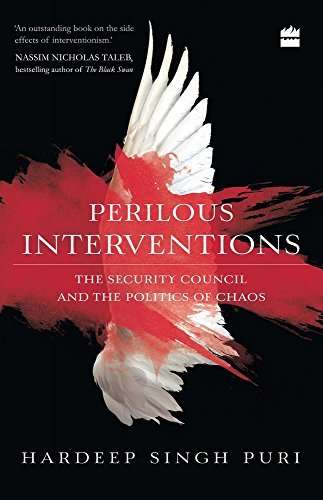 As modern civilisation continues to reel under a battery of murderous attacks from Islamic extremists, many of who now claim to owe allegiance to the contemporary quasi-state terror entity called the Islamic State (IS), the world looks increasingly vulnerable to ordinary citizens, who wonder at the impunity with which militarised attackers are able to operate freely and spread mayhem, penetrating security shields of cities and countries that have spent billions of dollars to fortify themselves.

There are conflicting explanations to the ISIS phenomenon, and reasons for their emergence on the global scene are as varied as can be expected from a divided world order that seems more intent on downsizing each other than joining forces against a common global enemy.

Throwing some light and plenty of fresh insight into a tangled web of misjudged decisions by the West is Hardeep Singh Puri, who was acknowledgedly one of India’s outstanding plenipotentiaries in important global capitals. As India’s Permanent Representative at the United Nations between 2009 and 2013, coinciding with the 2011-12 period when India was non-permanent member of the United Nations Security Council, Puri was witness and often participant in the select club of diplomatic parleying at the horseshoe-shaped table of global negotiations.

In a book he has penned within three years of his retirement, Puri rips the veil of faux altruism of these “high-end decision-making, often over $80 per head lunch” and talks of how a small group of the world’s most empowered diplomats represented on the Security Council discuss the use of force on other nations to effect regime change and how this “ill-thought out itch” to intervene results in disastrous consequence for the country, the region and the world. 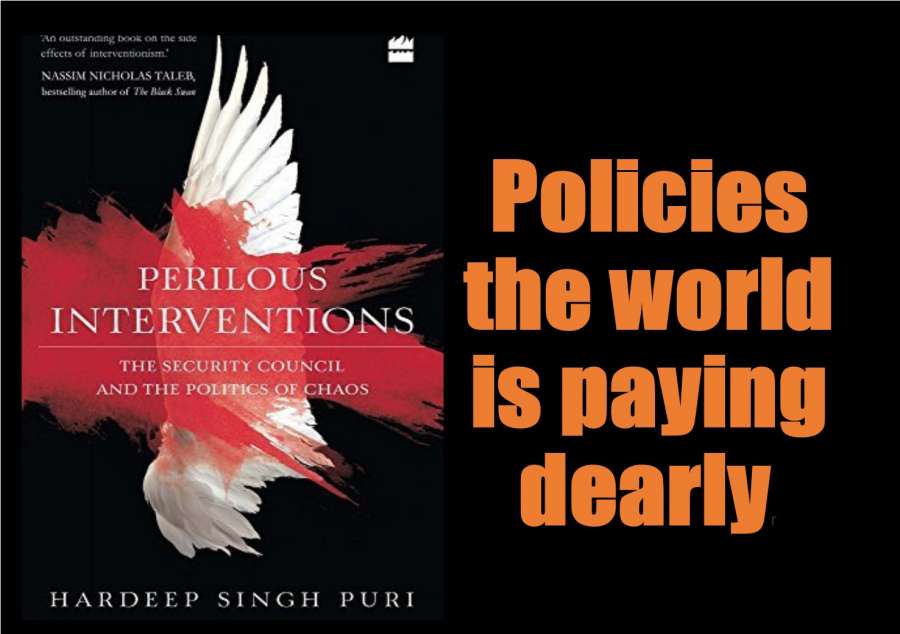 “Perilous Interventions: The Security Council and the politics of chaos” is an insider’s account and interpretation of the West’s “desire for geopolitical domination” which has often resulted in recent years — in theatres of conflict from Iraq to Libya — in policy decisions that have set in motion a “vicious cycle of terrorism and chaos” that shows no signs of ebbing or being tamed.
The West’s penchant to be self-righteous and assume the high moral ground in the pursuit of Western values (…”their desire to be presumptive, to set norms for everybody that reflect the views of the West, has always been evident”) has led to decisions being taken by people with little knowledge of the social dynamics of the region, with unforeseen and tragic consequences.

It has, as Puri says in the book based on meticulous notes he maintained during his years at the UN, his last diplomatic posting in an illustrious career with the Indian Foreign Service, “invariably led to the rise of terrorists and non-state military actors…” like the ISIS phenomenon.

Puri dubs ISIS “the unwanted child of failed interventions” and traces its genesis to “costly policy mistakes” which often get repeated when policymakers ignore the lessons of history.

The migration crisis, which is a humanitarian disaster and is leading to unpredictable economic, political and social conflicts in Western societies, was never considered by Western decision-makers, and has, as Puri suggests, “upset delicate social, ethnic, tribal and sectarian balances and the secular ethos often maintained by authoritarian regimes”. Iraq, Libya and Syria are prime examples of this.

Puri’s conclusions are devastating in their forthrightness and he says categorically that ill-advised military interventions — which are even now being propounded, often in moralistic terms, for a fractured Syria by Western leaders, academics and think tankers — are not the answer to poor governance whose ideological underpinnings may not be in sync with Western philosophies.

What is more worrying and reinforces the argument of non-Security Council countries like India on the need for urgent UN reforms and re-structuring, is that the Security Council, the highest decision-making body that has been mandated by a global order to preserve world peace and stability and protect citizens from state-sponsored atrocities, has been manipulated by a clutch of countries and is often unable to perform its expected global peacemaking role.

Nearer home, Puri dwells on the Indian military mission in Sri Lanka in the late eighties, in the form of the Indian Peace-keeping Force (IPKF), but rationalises “outside intervention” in this case to the persistent “mistreatment of the Tamil minority” with whom sections of Indians had social and cultural links through the ages.

A book that must be read by those interested in global affairs and in understanding the complex interplay of political, diplomatic and economic impulses that goes into making crucial decisions that have consequences for the world for years and decades to come.