Vikas Datta reviews The World in Conflict by John Andrews. Mr Datta says the book is an expert diagnosis of the violent world 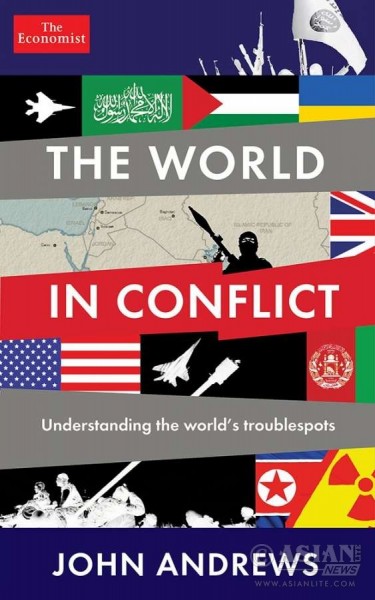 The human race’s optimism would have been comic, had it not been frequently belied by tragedy – and their propensity to violence. After almost every major conflict – be it the two World Wars, the Cold War, or more recently, the Afghan and Iraq wars – or major paradigm shift, like the “triumph” of democracy, of globalisation, there has been hope that there would be abiding peace at last. Facts on ground argue otherwise.

Even today, or rather, especially today, conflict – actual or latent – afflicts nearly a third of all countries across five of the six populated continents – and it always doesn’t need to be between nation-states.

The conflicts in Afghanistan, Iraq and Syria, and Libya, the India-Pakistan standoff, the inter-Korean stalemate and the prickly Israeli-Palestinian issue have been going on quite some time, but there are many more, including in what used to be the Soviet Union and as the case of the happenings in Ukraine shows, they also have power to affect the regional and international order.

Evolving superpowers may also plant seeds – China’s increasing efforts to assert its offshore presence’ worries a lot of its Asian neighbours. And then who can ignore the violence by transnational Islamist terror groups, chiefly Al Qaeda and now increasingly the IS, and their local proxies, or secessionist or revolutionary groups.

Avid followers of news might know of the Kurds and the IRA, Yemen’s Houthis, Boko Haram in Nigeria, or the FARC or Shining Path in South America or the IRA, but where does the Movement for the Liberation of the Enclave of Cabinda operate or for that matter, the Informal Anarchist Federation? What are the goals of the Militant Popular Revolutionary Forces of Greece, or the Groups of Popular Combatants in Ecuador?

This book will help you.

Not only does it comprehensively list the “causes, contexts, participants, impacts and likely outcomes” of all existing conflicts, it also seeks to address “why global conflict is ever-present in our lives”, as well as “where, how and why new conflicts might erupt”.

Andrews, “The Economist’s most experienced foreign correspondent, with postings in Europe, Asia and America”, notes the “word ‘conflict’ can be applied to everything from a playground squabble to the Second World War” and but for his book, he uses it as “a difference of opinion – between nations, peoples or political movements – that involves the use of deadly violence” with the yardstick is that such a conflict should still be happening – that is why the post-Yugoslavia wars and the Rwandan genocide get only a passing reference.

But still Andrews says that “there is a sobering number of conflicts that satisfy my criterion” from the obvious cases of Iraq and Afghanistan to secessionist violence around the world and even violence by Latin American drug cartels threatening the state.

He stresses “conflicts can have many, often overlapping causes, which makes it difficult to catalogue them by categories such as religion, race, territory, resources or ideology” and the simplest solution is presenting them “by geography and country, even though many conflicts, especially in Africa and the Middle East, cross national boundaries” – and that is what he has done.

But adding to the wealth of information of conflicts across the continents is an insightful look at the causes of genesis of conflict, and its future which encompasses von Clausewitz, Mahatma Gandhi, Dalai Lama, Huntington and his “clash of civilisations”, Fukuyama and his “end of history”, Rummel and his “democracies do not fight each other”, Steven Pinker, the “CNN-effect” and more.

There are some unfortunate mistakes – Archduke Franz Ferdinand was assassinated in Bosnia, not Serbia, the Kargil conflict didn’t cause wave of refugees (possibly confusing it with the cross-LoC artillery duels), and the ULFA in India’s Assam state is “not mainly Muslim”. But, as a whole, as a compendium of incisive but accessible accounts of the world’s trouble spots, the book more than holds its own.