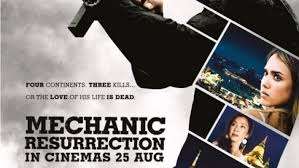 For all those who believe everything imported is consumer-friendly, here is an eye-opener. “Mechanic: Resurrection” is so irremediably awful that it makes this week’s Bollywood release “A Flying Jatt” look like a classic in comparison.

Sloppily written, jerkily edited and spasmodically imaged, this is what one Indian politician in another context described as ‘a visit to hell’. In one penultimate sequence of purported thrills, we see the arch-villain tied up in chains and beaten to a pulp, with no scope for escape. This is exactly how we feel watching the extended exploits of the assassin Arthur Bishop, played by Jason Statham.

Now, Statham is cinematic phenomenon worthy of rigorous research. Not one of his facial nerves twitches even when his character is under extreme emotional pressure. Given Statham’s aversion to emotional expression, his co-star Jessica Alba comes through as a distressed version of Meryl Streep.

When we first meet Alba, she is being beaten black and blue by her boyfriend on a Thai island (where I’d like to take a vacation, provided the Mechanic team is not shooting the third part of the fran(tic)chise). Statham falls in love with Alba, and blows up her bully boyfriend in a boat that one hopes was insured.

We can only guess at Statham’s feelings for Alba since his face gives nothing “I repeat, NOTHING” away.

Soon, Statham and Alba are kissing and tearing at each other’s clothes, generating as much passion in the process, as a dentist for his cavity-drill. Statham is clearly not comfortable playing the loverboy.

Just what he is comfortable doing, we will never know (not even in the third or fourth part of this grand bland brand). Stunts are Statham’s forte. In the opening action, he is seen negotiating with a female outlaw about a triple assassination.

Statham/Bishop clearly doesn’t know how to respect the woman. Instead of saying a polite, “Thanks, but no thanks” (as we should all say to this fatuous franchise), he shoves the coffee table at an open-air restaurant between the lady’s legs, and takes off in a cable car like James Bond.

While Statham channels the dormant Bond within himself, Alba seeks the Mother Teresa in herself and tells us about her shelter for children in Cambodia, now threatened by the arch-villlain Craine (Sam Hazaldene). “If anything happens to my children I won’t be able to bear it,” she sobs in a short skirt.

A thought: did Michelle Yeoh and Jessica Alba exchange roles?

Of course, Bishop and Craine have a history .

Craine orders Bishop to go through triple murders (yup, the same offer turned down so rudely by Bishop at the movie’s prelude) if he wants Alba’s shelter-home to be safe. One by one, Bishop goes through elaborate murder plans. When he comes to the third assassination, Bishop spares the victim. Probably because he is Tommy Lee Jones. And no one kills the ageless Mr Jones. Not even god.

Who, by the way, is nowhere to be found in this godforsaken helluva film.

This is the second film in the Mechanic series. If there’s a third in the pipeline, let there be apocalypse first.